However, under the Smart Meter National Program, India will gradually replace its 270 million traditional meters with smart meters. India is also working towards building an extensive Advanced Metering Infrastructure (AMI) to seamlessly integrate smart meters with the existing grid. This makes India one of the fastest-growing smart meter markets across the world.

Smart meters are associated with numerous benefits, both for the Distribution Companies (Discoms) as well as the end-users. It can significantly reduce Aggregate Technical & Commercial (AT&C) losses, automate the billing process, effectively manage outages and improve overall collections. Likewise, end-users can wield control over the power consumption through monitoring of historical data. An extensive smart meter network that can rationalize losses and build efficiency throughout the grid is also aligned with India's long-term objective to contain its Carbon footprint.

Presently the total size of the smart meter industry in India is USD 1.463 billion. The size of installed capacity is around USD 253 million, whereas USD 1.21 billion is under procurement. The future potential is estimated at USD 18.6 Billion. Earlier imports from China dominated the market. However, the governing agencies have now mandated domestic production capabilities for companies willing to supply smart meters. It is giving a major push to domestic manufacturing. 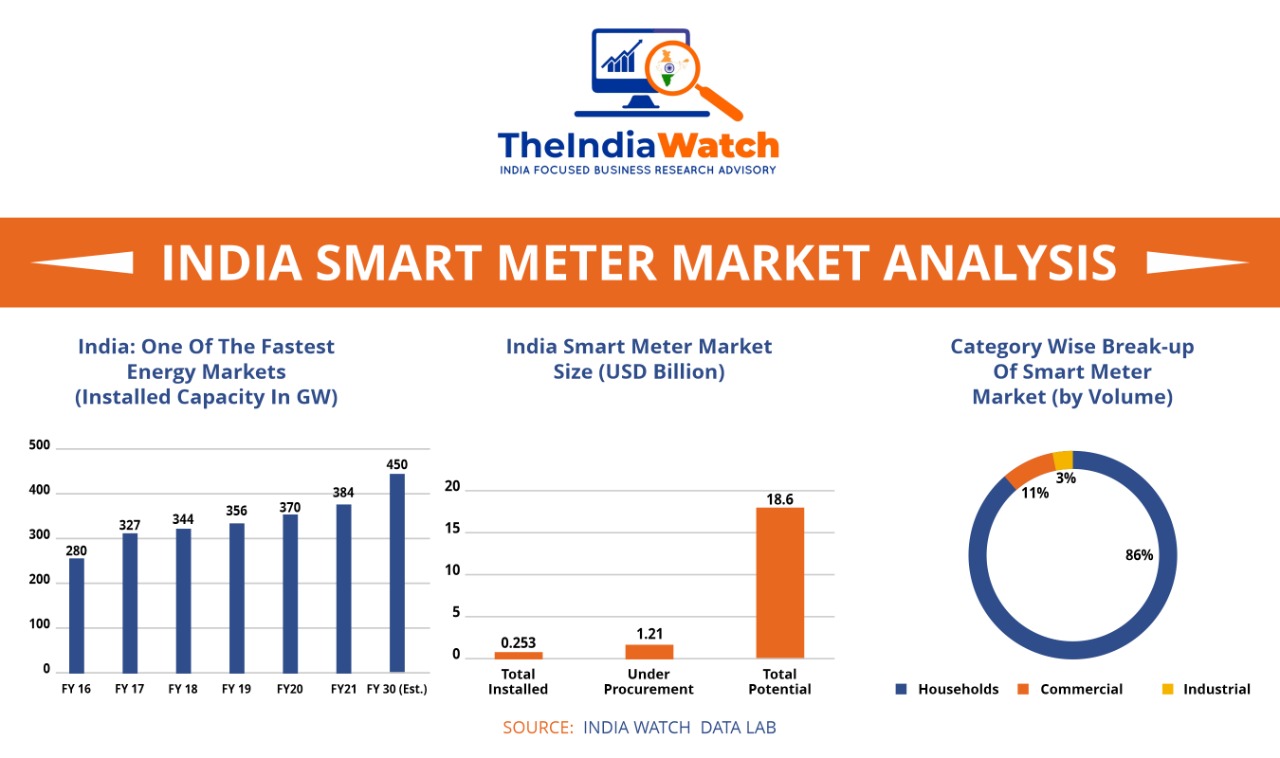 Smart meters have multiple usages and the power ministry, governing agencies, Discom companies together with EESL and Intellismart will remain committed to replacing the existing metering systems with smart meters. An extensive smart meters network will help in lowering the AT&C losses, which are high in India. As per the report by Central Electricity Authority (CEA), in FY 19, the total AT&C losses amounted to 20.66%, marginally reducing from 21.04% in FY 18. It has been estimated that following the widespread deployment of smart meters, the AT&C losses can be reduced to less than 10% by 2027.

The lockdown during the pandemic has also reinforced the significance of the smart metering system. During the lockdown, it has been nearly impossible to physically collect tariffs, thereby further undermining the revenue streams of Discom companies. Remote monitoring and collection through smart meters can be a possible alternative in near future to ensure a smooth and seamless collection of tariffs.

Meanwhile, the regulatory bodies will also need to formulate stronger privacy rules, as smart devices have access to a lot of personal information of users including their device usages and entertainment preferences. Policies should be put in place to clamp down on any malpractice of selling personal information.

Interest in smart meter manufacturing is bound to rise in the times to come as India's aggregate potential is close to USD 18.6 billion. Domestic manufactures will ramp up their production while international players will set up new production units in the country to fill the gap. This will however also require cohesive access to, market/ industry data.

As an India Centric Market research and information advisory €œIndia Watch€ can provide the needed research and data to help companies make winning decisions. Our host of services include but are not limited to the following: