After opening its economy & deregulating its market in the 90s, India made notable progress. From a welfare state, it made a steady transition into a partially regulated yet competitive market in the next 20 years. However, Indian infrastructure remained a bottleneck.

When the Modi led current government came into power in 2014, one of the objectives was to address the widening infrastructure gap in the country. Higher budget allocations, simplified rules for private sector participation, and transparent auction process were put in place.

In budget 2019, the Government of India (GOI) announced an ambitious plan to invest USD 1.4 trillion in developing Indian infrastructure over the next 5 years. To further build transparency and accountability, it has released a National Infrastructure Pipeline (NIP), a detailed report that mentions sector-wise infrastructure projects till FY 25. It has allowed 100% FDI in infrastructure and has given 100% Tax exemption on dividend, interest, & profits.

Even Post COVID, road construction activities are unperturbed as the country is building around ~32 KMs of highways every day, under the patronage of the Bharatmala Project, the flagship initiative by the GOI to seamlessly connect numerous urban & rural areas in the country. 22 Green expressways have been announced recently, out of which work has begun in 7. These expressways will also incorporate business parks, agriculture parks, smart cities, smart villages, logistic parks, etc. to boost economic productivity, support manufacturing, & create innovation-led growth. Further, these expressways will be cohesively linked with shipping ports, airports, & railway corridors to augment overall trade and export.

Alongside extensive roadways, there is a strong focus on developing and transforming the railway & airport networks. GOI plans to invest USD 60 billion in modernizing existing airports along with developing new Greenfield projects. Work is also going uninterrupted in a couple of dedicated railway freight corridors. The ambitious high-speed bullet train project has also moved out from conceptualization to implementation phase as land acquisition has begun. The GOI has also proposed 35 Multi-Modal Logistics Park (MMLP) that will give a facelift to the Indian manufacturing sector. These MMLP can significantly reduce freight charges & speed-up the flow of goods & passengers. 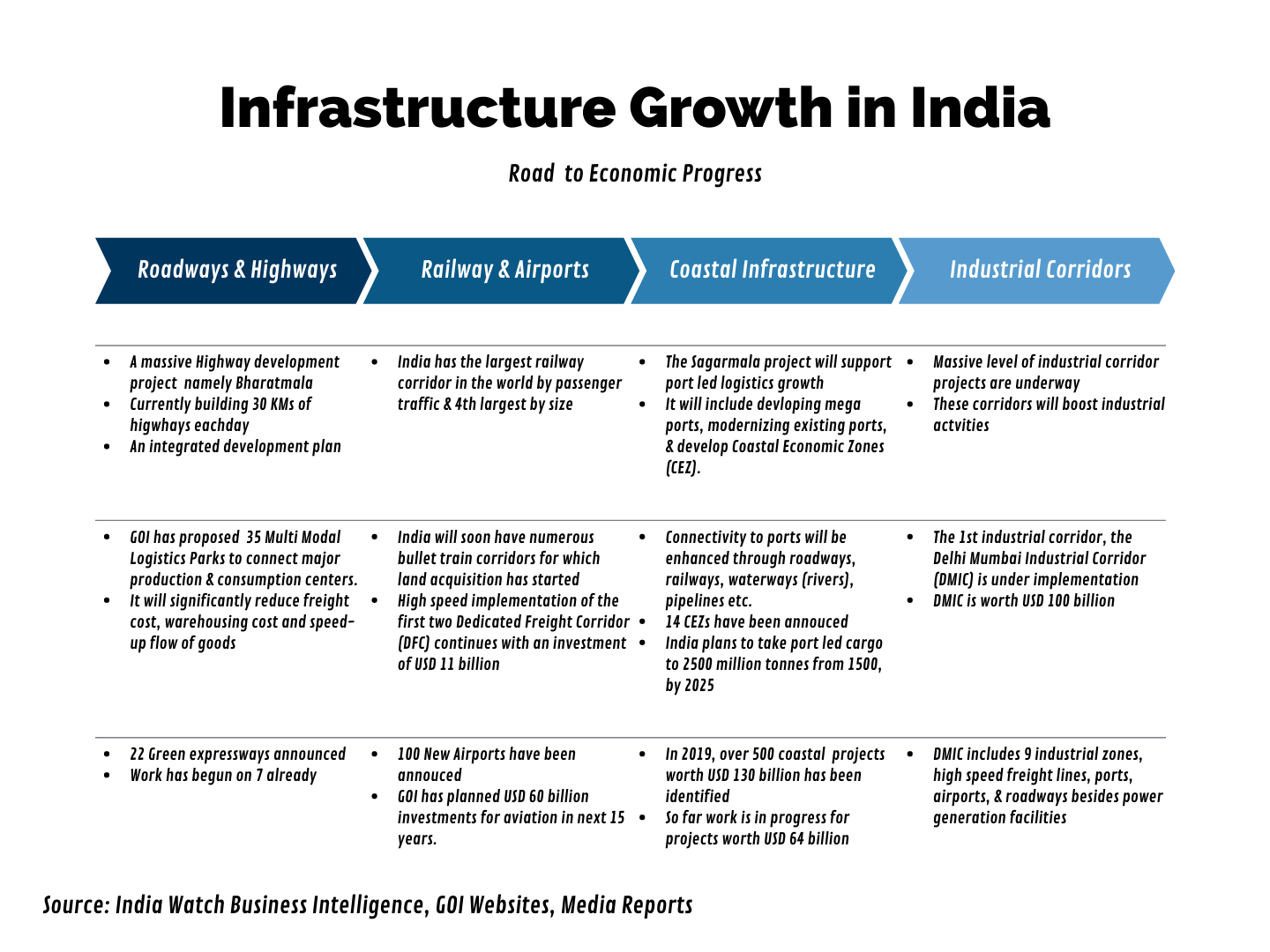 To unlock the potential of the 7500 KM long extensive coastal region, India has embarked on the Sagarmala project. Besides building new ports and modernizes existing ones, the project is also diligently working towards enhancing connectivity to ports through roadways, river water, railways, & pipelines. To accelerate port-led trade, Sagarmala has also announced to develop 14 Coastal Economic Zones (CEZ). These CEZs will be dedicated to economic and manufacturing clusters located in the coastal parts of the country. Through policy impetus and tax incentives, GOI will attract various domestic and international companies to come and establish in these coastal regions. 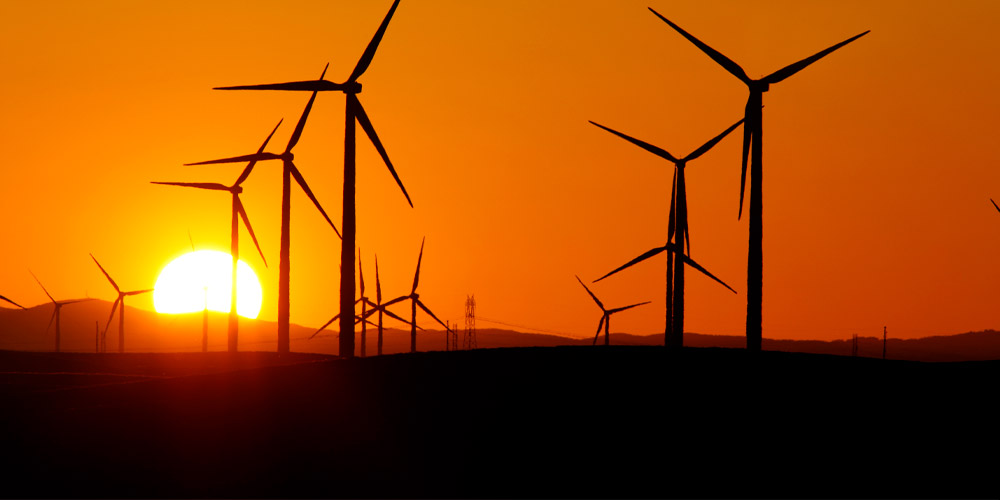 In FY 20, India’s total installed energy generation capacity reached 370 GW, growing more than two-fold in the last ten years. Renewable sources such as wind and solar constitute around 22% of the total installed capacity in the country. Around 40 GW of solar energy project is currently under implementation.

The Delhi Mumbai Industrial Corridor (DMIC) is also undergoing speedy implementation, connecting the political capital of the country with the commercial focal point.

The USD 100 billion projects, which is also touted as one of the largest infrastructure projects in the world encapsulates a host of industrial clusters, logistic facilities, & power generation capabilities. It is believed that once fully functional, DMIC will, directly and indirectly, influence the lives of millions of Indians.

In the face of the COVID triggered crisis, Indian Real Estate has suffered a slowdown in demand. However, the long-term potential of the market looks upbeat. The Real Estate market, which is currently pegged at USD 120 billion is expected to reach USD 650 billion by 2040. A huge population, growth in the middle class, and rapid pace of urbanization will continue to push forward the realty market in the country.

Indian infrastructure is actively featuring on the radar of leading international and domestic investors including sovereign wealth funds, pension funds, insurance funds, family offices, HNIs, and much more. Risk mitigated elevated IRR is one of the key driving factors for investors.

For instance, in Indian Railways (IR), which has mostly been a state-run affair, the government has recently decided to run 150 private trains across 100 routes. For track renewal and maintenance as well, IR is now actively looking forward to private contractors and suppliers alongside publicly run enterprises.

The government is also mulling to allow 100% FDI in completed real estate projects. So far, FDI is allowed in the construction of real estate but prohibited in the real estate business. The new policy will create new investment streams for international entities to participate in lucrative Indian Real Estate.

The first ropeway in India was developed in the 1960s, when it was used to carry sand to the coal mines. The public application of the ropeway started in the 70s. H

Under the Modi government, India has been aggressively looking to expand its manufacturing industries. Presently the share of manufacturing in the gross GDP is roughly ~ 17%. In contra

As one of the fastest-growing emerging markets in the world, India's energy appetite is vast. India's growing, industrial sector, businesses, and agriculture, al

Read More
The Inauguration of Rewari-Madar Line on WDFC

India has achieved a major milestone with the inauguration of the 306 KM long dedicated railway line between Rewari (Haryana) and Madar (Rajasthan). The dedic

Read More
Has the time for Desal Water come to India?

The Indian Desalination market is expected to grow at a competitive pace, as the country will try to harness its 7500 KM long coastline to manage its water