India’s processed food processing industry has plenty of potentials to take off. Large population, evolving consumer trends, and growing middle class are resulting in increased demand for processed food.  Food comprises 31% of the overall retail basket in India, amounting to USD 294.5 billion. Out of this, the size of the processed food (and beverage) is around USD 94.3 billion. Food alone is sized at USD 69.5 billion, followed by the beverage (non-alcoholic) segment, which is pegged at USD 16 billion. Other segments such as gourmand, superfood, immunity-boosting food, etc, are also registering rapid growth in the country.

India is one of the largest food producers in the world. It contributes more than 17% of the dairy productions in the globe. It has over 500 million livestock, the highest across the world. In major categories such as cereals, pulses, fruits & vegetables, etc, it is the second-largest producer in the world, after China. It also features as top 5 producers in numerous important categories such as tea, spices, sugar, etc.

However, India’s processed food market is in its initial phase of development. A large portion of food processing in India consists of primary processing (floor mills, spices, dairy products, etc) which limits value-addition. Only 2% of Fruits & Vegetables (F&V) is processed in India, despite the country being the 2nd largest producer in the segment. Likewise, only 21% of meat products and 35% of dairy products are processed. In contrast, the Chinese food market comprises around 60% of processed food.

India’s secondary processing capabilities are still limited but the segment is growing at a fast pace. There are plenty of sunrise segments in processed food such as breakfast cereals, baby food, snacks, confectionaries & bakeries, kitchen ingredients, which are registering exorbitant growth. The lockdowns have resulted in increased interest in cooking and consumption of food at home. This is driving demand for snack food items, bakeries, packaged foods as well as numerous ingredients and such as sauces, sushi, pasta, etc.

India’s high capacity of food production, low existing rates of food processing, and structural changes in demand render tremendous potential to the industry. However, to become a major international player in food production, India would need to enhance its productivity, scale up production, and seamlessly integrate with the global supply grid. 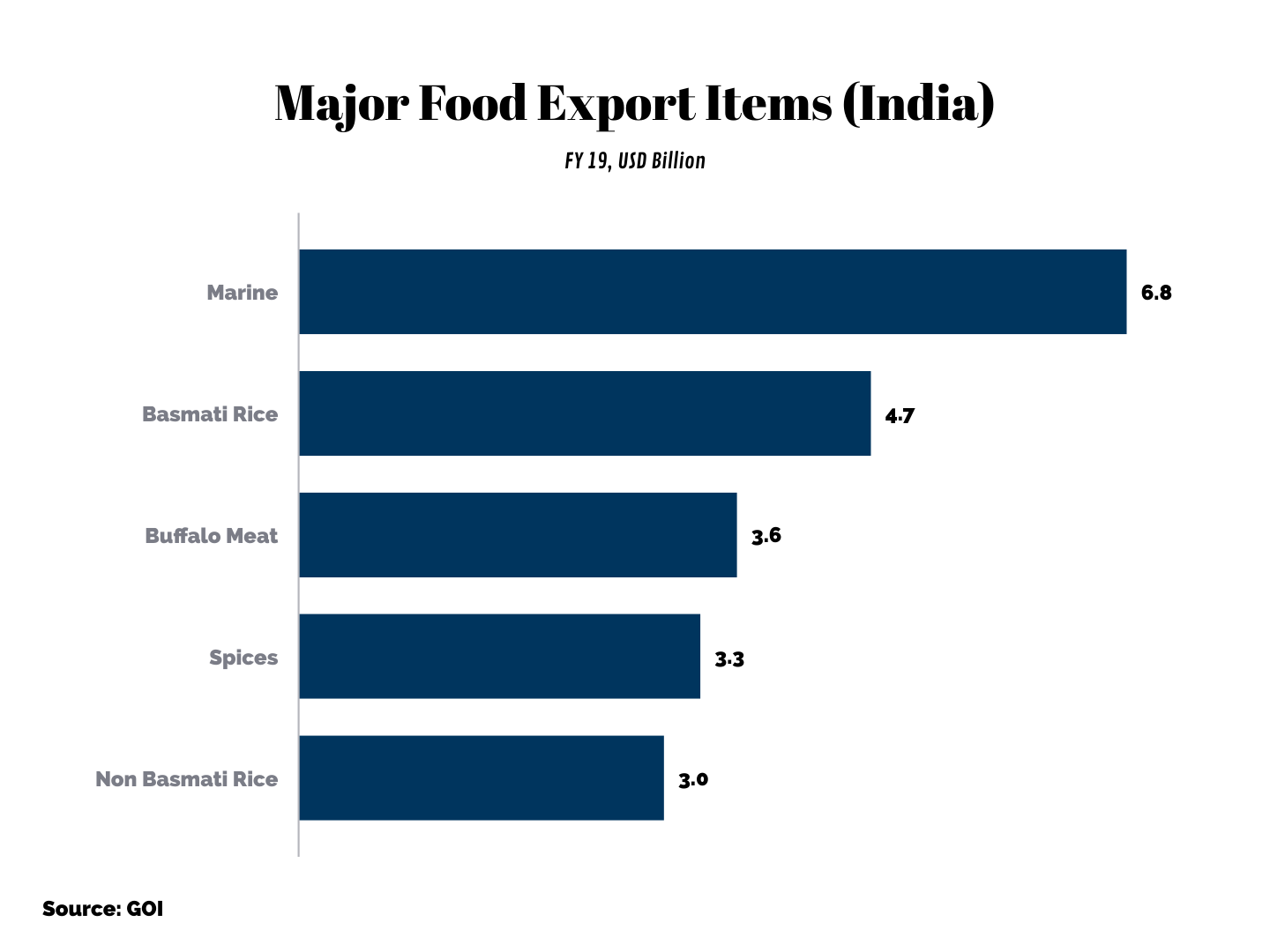 Indian food export basket primarily consists of raw and semi-processed foods, which are subsequently processed in other countries. Though an inherent weakness, it also signifies there is ample opportunity to move up the value chain.

To foster growth in the food processing sector, GOI has simplified FDI policies and allowed 100% foreign investments under the automatic route. As retail is the prime channel of food disbursal in India, easier FDI policies have been laid out for the retail sector as well. 100% FDI has been allowed in SBRT, wholesale cash & carry, and e-commerce (FDI participation in the inventory-based model is barred in India). In addition, 51% of FDI has also been allowed in the MBRT. The easier FDI policies come with conditions of investing in backend infrastructure.

A simplified and strategically prudent FDI approach in food processing alongside retail is helping in bringing in more capital, better technology transfer, and improved backward integration. 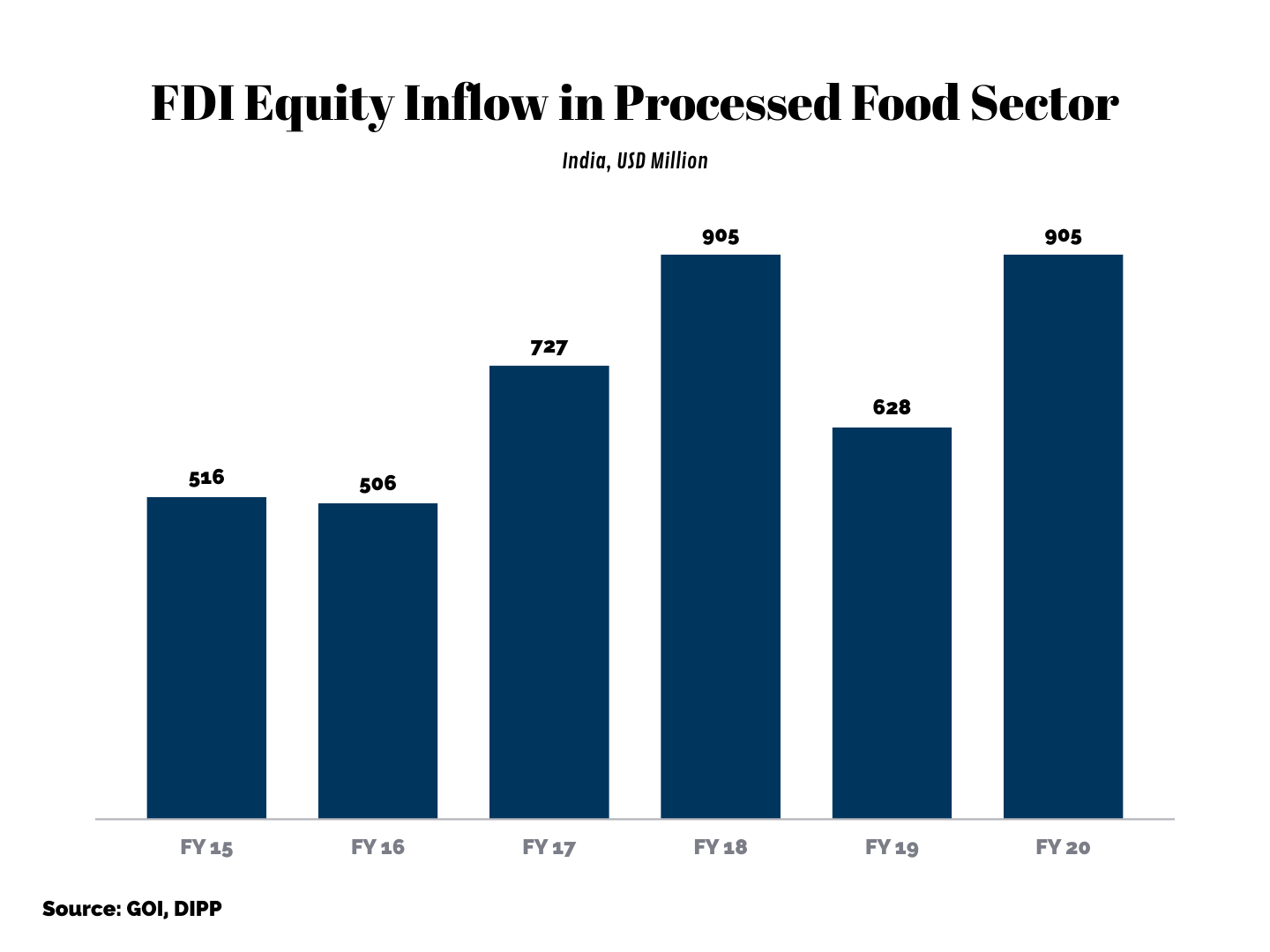 Similar to other strategic segments such as smartphones, textiles, and pharma, GOI has announced a generous Production Linked Incentive (PLI) of around USD 1.5 billion for the food processing sector. The scheme is aimed at incentivizing the production of specific categories such as Ready to Cook/ Ready to Eat, Mozella Cheese, processed F&V, marine products, organic foods (meat & poultry). The PLI scheme will be implemented from FY 22 to FY 27 and help in the marketing, branding, and promotion of Indian brands in international markets. The government estimates that the prudent step will help in registering incremental sales of USD 4.7 billion by FY 27.