Pegged at ~ USD 40 Billion, the Indian Pharma Industry has the Potential to grow Vigorously

Indian Pharmaceutical industry, which is pegged at USD 40 billion has the potential to take off and grow manyfold in the times to come. India already plays a dominant role in the global generics market. Soon, the industry is aiming to upscale by expanding its foothold in other categories such as biosimilars, APIs, diagnostics, medical devices, biotechnology, etc. The country is set to play a larger role in the global pharma supply chain.  India's strength stems from expansive domestic demand, ample availability of raw materials, the large volume of affordable yet quality human resources, and conducive government policies.

In the last 7 years, India's pharmaceutical exports have grown by a CAGR of 6.8%. While the adverse effect of the pandemic ripped through the economy, the steady growth in pharma exports remains unperturbed  In FY 21, during April- Dec, pharma exports amounted to USD 17.6 billion, climbing by 12.4% during the same period last year.

Indian pharma manufacturing's inherent strength has also been revealed during the COVID times when the country drastically expanded indigenous production capacity for consumables (Masks, PPE Kits, Sanitizers, etc), testing kits, and ventilators in a short period. India is also at the center stage of the development and deployment of COVID-19 vaccine dosages. With an annual aggregate capacity of 3.6 billion dosages, the country comes second after the USA. 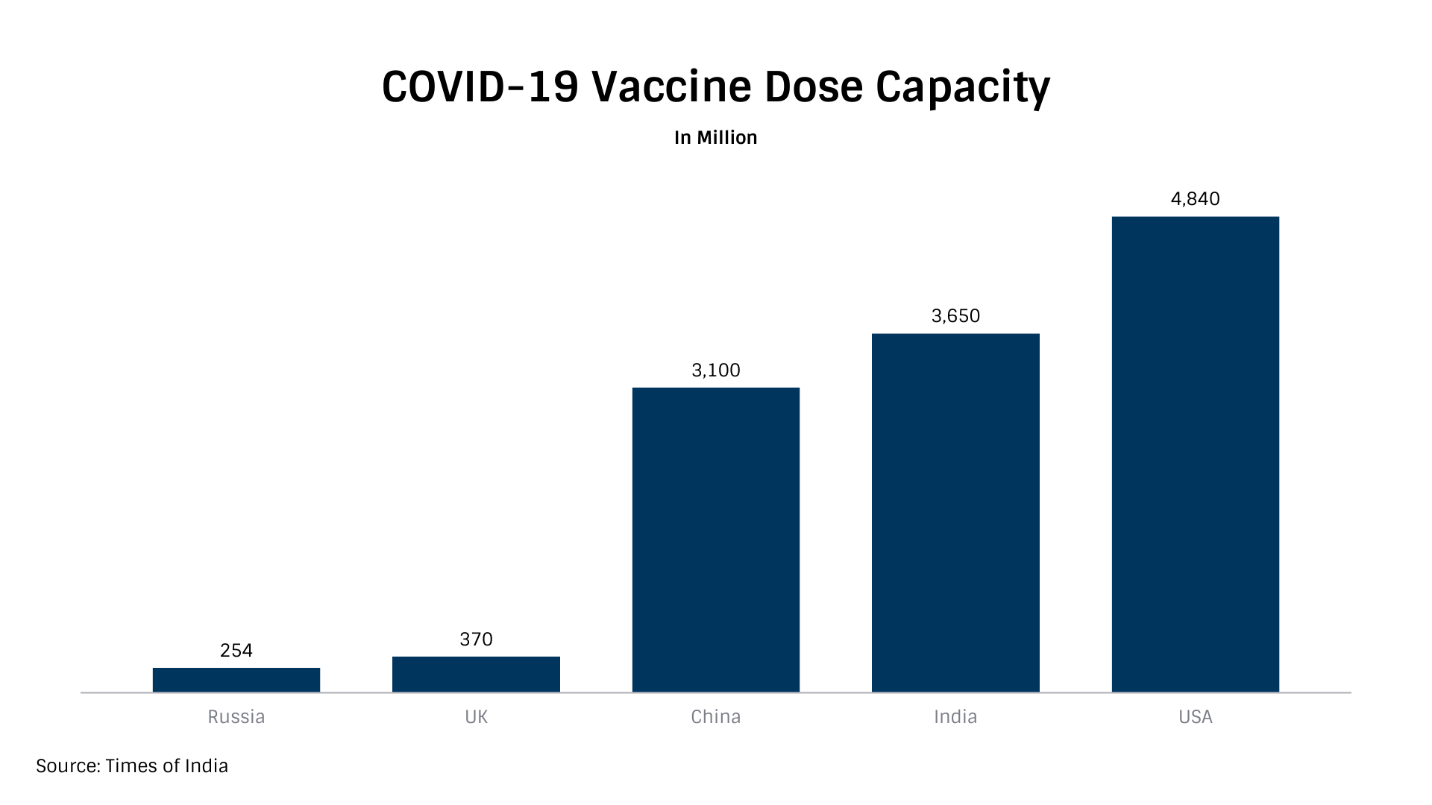 It has already gifted 5.5 million vaccine dosages to neighbouring countries alongside commercially exporting vaccines to Brazil, Morocco, and Bangladesh. It is also in talks with other viable markets such as KSA, South Africa, Mongolia, and Canada to export vaccine dosages.

India's expected uprise in the global pharma industry is backed by strong structural and policy support by the government.  The government has devised a host of supportive policies to further help the sector expand, upscale to other high-value products, and uplift its export volume.

100?I has been allowed in the pharma sector under the automatic route, which has resulted in a cumulative FDI inflow of USD 16.8 billion from 2000 to Sep 2020.

The government has also announced a PLI of over USD 2 billion (INR 15,000 Crores) to further develop manufacturing capacity and boost exports. The PLI scheme, which will be operational from FY 21 to FY 29 is expected to result in incremental exports of over USD 26 billion. 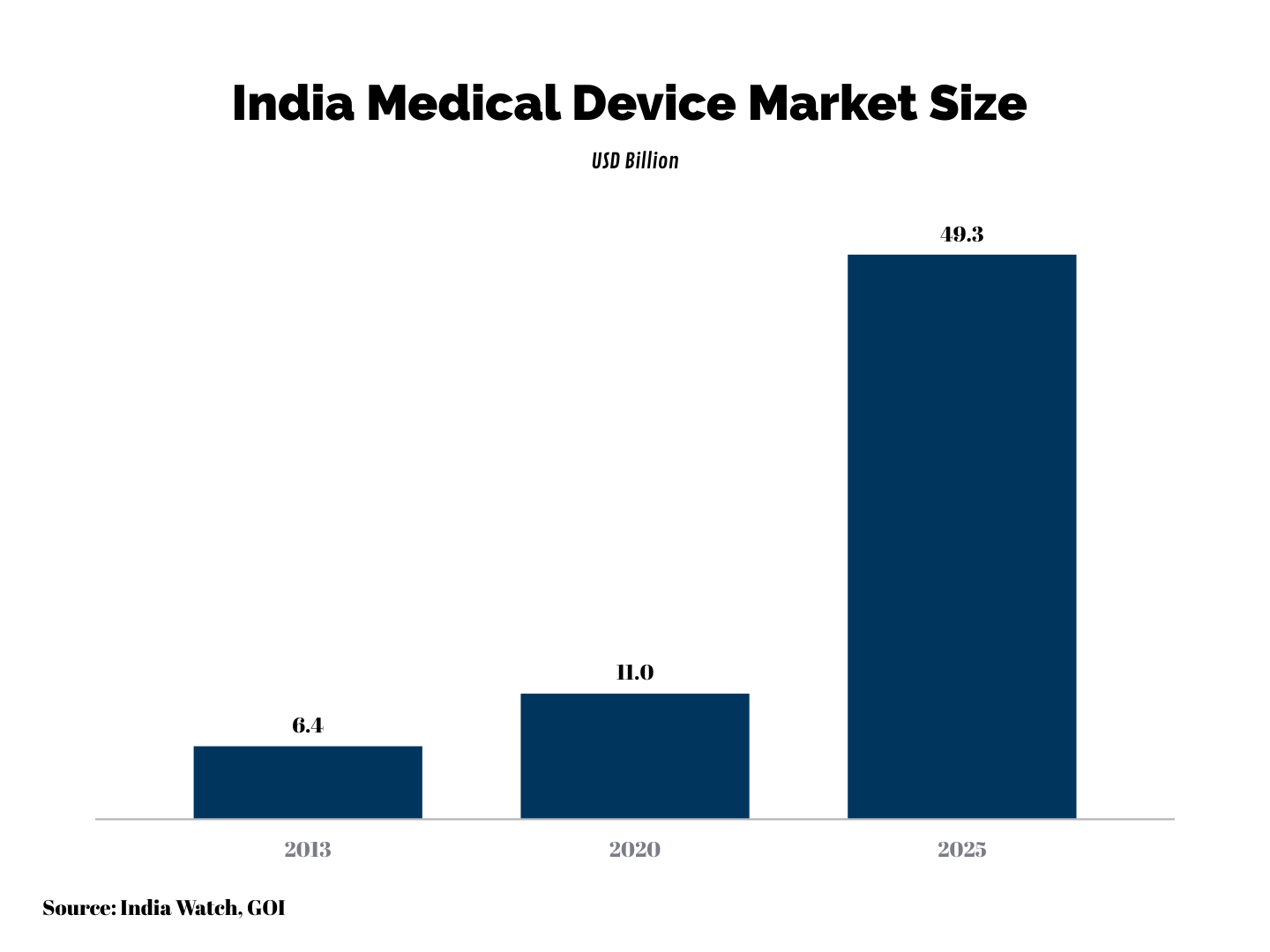 Indian medical device market is estimated to be around USD 11 billion. The market is expected to climb at a CAGR of 35% from 2020-25 backed by the rise in the number of medical facilities, growth in disposable income, and rising health awareness.

Currently, the market is import-dependent with around 75-80% of imports coming from Germany, USA, and China. However, through concentrated policy efforts, the Indian government is planning to ramp-up the domestic production of medical devices. Besides 100?I in medical device production and incentives to develop indigenous R&D facilities, a PLI scheme of USD 470 million has been announced for medical device production. The PLI will be distributed across various categories including cancer care, renal care, implants, radio imaging, anaesthetics, etc.