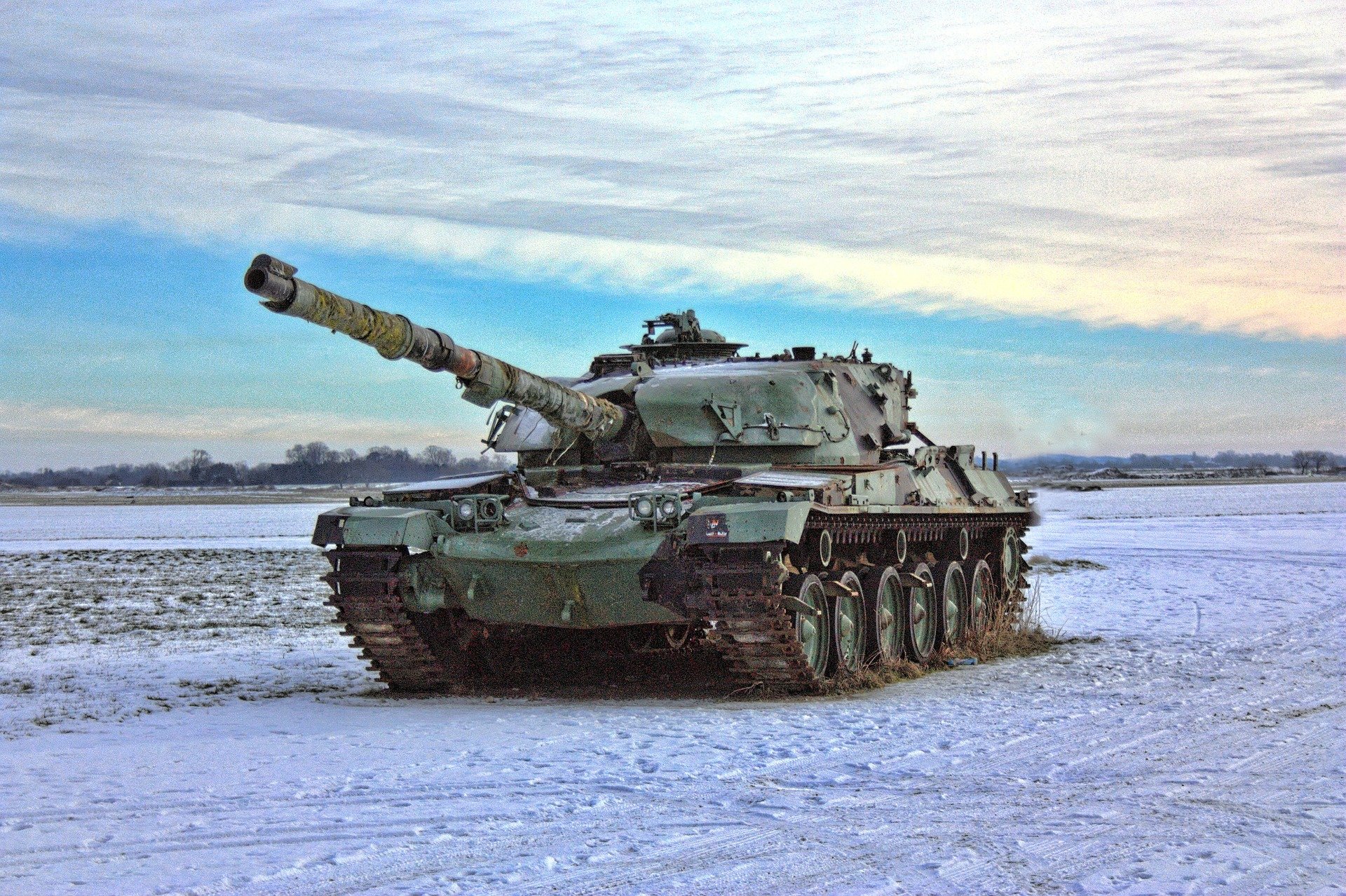 Indigenization of Defence Manufacturing in India: An Opportunity for Global Manufactures

India is one of the biggest defence markets in the world. In the current fiscal, India’s defence budget is USD 63 billion, accounting for 13.7% of the total budgetary allocation by the Government of India (GOI) USD 18.48 billion will be spent on acquiring new arms and military systems, rising 16% compared to the previous fiscal. India’s defence budget is 3rd largest in the world, after USA and China.

Indian defence has primarily been reliant on Imports. However, the present Indian policy is marked by a systematical reduction in imports and achieving indigenization in defence and aerospace manufacturing. Through concentrated policy efforts, India is building domestic manufacturing capabilities. India is also aiming to acquire a sizable share in global arms exports. In FY 29, India’s total defence exports amounted to USD 1.47 billion. By 2025, India aims to achieve a total export of USD 5 billion.

In 2001, for the first time, India opened its defence sector for private sector participation and 100% of private investments were allowed in the sector. The same year, the sector was opened for the first time for the FDI with a 26% cap. (Later on, in 2021, 74% FDI has been allowed in defence manufacturing under the automatic route.)

However, the local manufacturing capacity is limited resulting in reliance on imports for around 60% of military hardware & systems. As per the research published by the Stockholm International Peace Research Institute (SIPRI), from 2011-15, India amounted to 14% of the overall arms import in the world.

The SIPRI report has indicated a 33% reduction in Indian arms imports. (In contrast, other major importers such as Qatar, Egypt, and Saudi Arabia have shown an increase in defence imports.)

India’s reduction in defence imports underlines the commitment of the government to develop local manufacturing. India wants to develop a USD 25 billion defence industry by 2025, out of which export will contribute 20%. (It is also noteworthy that Indian exports have jumped steeply in the previous 5 years. However, it presently holds a minuscule share in the global defence market.)

GOI has allowed 74% FDI under automatic route in defence manufacturing and production. It is increasingly reaching out to global OEMs to set up in India, following the strategic partnership model. In Aug 2020, 101 items have been enlisted under the negative list, which includes corvette, rifles, radar system, transport aircraft, light combat helicopters, sonar systems, etc. In May 2021, the defence ministry added another 108 items to the negative list which includes next-generation corvette, radar systems, Airborne Early Warning & Control (AEWS), the medium-range surface to air missile systems, etc.

Banning the import of defence equipment & systems will give a big push to domestic manufacturing. Alongside large-scale manufacturing, new opportunities will unlock for MSME and start-ups in the country. India has also allocated a defence procurement budget of USD 9.6 billion to be sourced exclusively from local manufacturers.

In another emboldened step, GOI has dismantled the Indian Ordinance Factories and have transformed them into seven Defence Public Sector Units (DPSU). Before this Ordinance comprised 41 manufacturing factories and contributes towards a sizable portion of requirements of Indian armed and paramilitary forces. It produces arms & ammunition, explosives, defence carriers, tanks, parachutes, and support equipment for the armed forces. The corporatization of ordnance factories is expected to bring more efficiency in defence manufacturing. 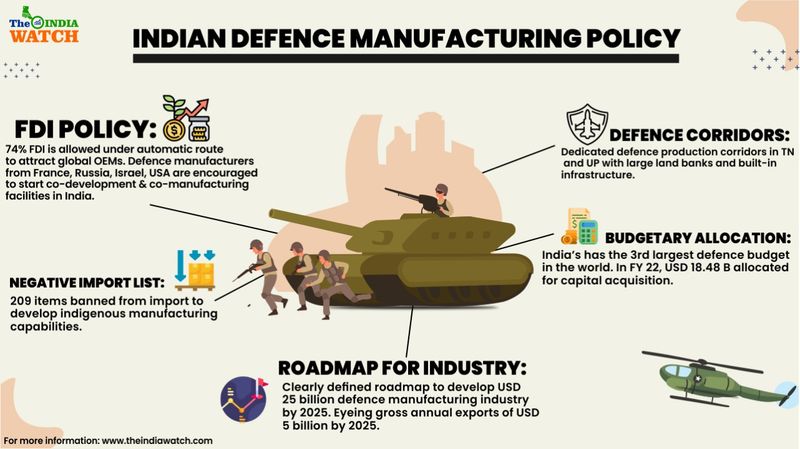 Dedicated Defence Corridors in UP & TN

To further give a facelift to indigenous manufacturing, India has developed dedicated defence corridors in the province of Uttar Pradesh and Tamil Nadu (UP & TN). The government is developing dedicated land banks with basic infrastructure and concession in electricity and water supplies to lure global and domestic companies.

The UP-defence corridor was set up in 2018 comprising of 6 key nodes including, Lucknow, Kanpur, Chitrakoot, Jhansi, Aligarh, and Agra. The Uttar Pradesh Expressway Industrial Development Agency (UPEIDA) has been appointed as the nodal agency to develop the corridor into a flourishing defence manufacturing base. Already, the license has been awarded to 20 companies and a total area of 137 acres has been allotted to local manufactures.

Encore research and Allen and Alvan have entered a JV to develop drone systems in Aligarh following an investment of USD 80 million. Brahmos has also shown interest in setting up a manufacturing plant in Lucknow city.  The previous year, German military hardware manufacturer Rheinmetall AG has shown interest in setting up a production facility in the defence corridor. The governing agencies are also in talks with numerous manufactures from the USA, France, Israel, and Russia to collaborate and manufacture in the region.

In TN, the defence corridor comprises 5 nodes namely, Chennai, Salem, Hosur, Trichy, and Coimbatore. The corridor, which was inaugurated in Jan 2019, has already mobilized an investment of around ~ 280 million. The state government has envisaged an ambitious target of catalyzing an investment of USD 10 billion over the next 10 years. It is also developing common R&D centres, testing facilities, etc. to support incoming investments. Prominent domestic and international players such as ISRO, L&T, GE Aviation are setting up facilities in the corridor.

India’s domestic production capabilities in defence manufacturing is still relatively small. Nevertheless, there is a tremendous amount of unrealized potential that can be systematically delved into.

Concentrated policy support, availability of dedicated defence manufacturing corridors with built-in infrastructure facilities, and large indigenous demand can help India become a flourishing defence and aerospace manufacturing hub in the world. Alongside fulfilling domestic demand, the country also has the potential to become a key node in global defence exports.