India with an equally large population and a much cheaper cost of labour can step up and fill the gaps. The country has implemented progressive tax reforms in the form of GST implementation and lowered corporate taxes alongside registering a sharp jump in Ease of Doing Business. This further makes it a suitable ground for toy production, both for the large Indian market as well as the globe. 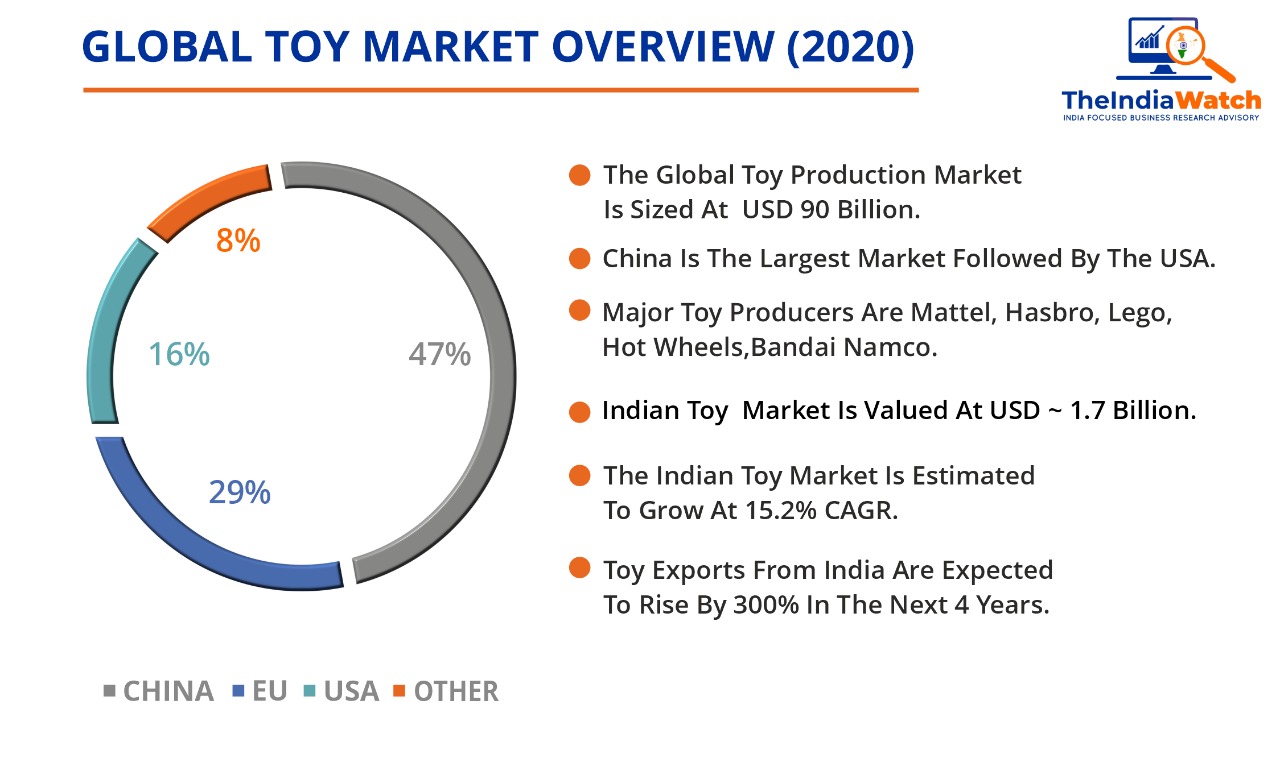 The global toy market is roughly pegged at USD 90 Billion, in which India plays a minor role. The Indian toy market is sized at USD 1.7 billion, accounting for 1.8% of the global market size. Out of which, the indigenous manufacturing capacity is even smaller and estimated at around USD 560 million. The remaining market is import-dependent, with China accounting for around 85% of the total toy imports.

There are around ~ 4000 toy manufacturing units in India. However, the market is fragmented with 90% of the units comprising of the small & medium scale production facilities. India's total toy export is estimated to be around USD 130 million and is non-existent when compared to China that dominates 75% of the global toy export market.

India still is a smaller player in global toy production, it has the potential to play a large role in the labour-intensive industry.  Indian domestic production and exports volumes are set to rise significantly in the coming years, stemmed from the large local market, conducive government policies and systematic investments in infrastructure, and affordable labour costs. The Indian government has announced to invest in eight toy manufacturing clusters all over India to scale up production and boost export. 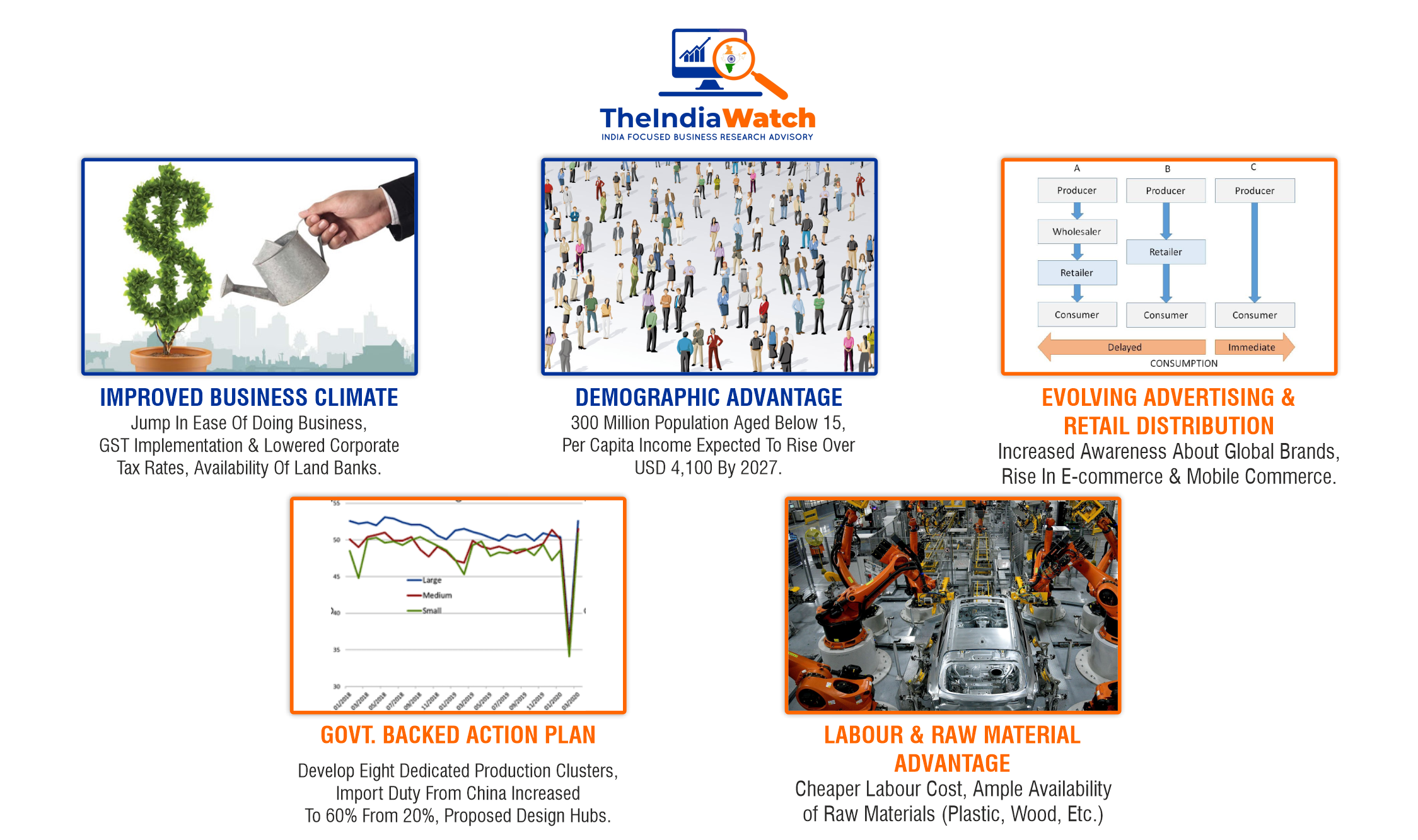 To further reduce the dependence on Chinese imports and foster domestic growth, import duties on Chinese toys have been increased to 60% from 20%. Besides the Ministry of Industrial Development, other related ministries in India such as the Ministry of Child & Women Welfare and the Ministry of HRD have been directed to take proactive steps to support local manufacturing. Toy manufacturing has also been identified as one of the 24 Indian industries to be supported under the flagship of Aatm Nirbhar Bharat (Self Reliant India).

India's attractive demographic dividend, wherein 300 million population is aged less than 15 is also a major growth multiplier. Over the years, there has been a significant uprise in the socioeconomic profiles of Indian households marked by expansion in the middle class and a rise in disposable income. This has also resulted in a significant shift in demand for toys from traditional lows and low-end battery toys to plush toys, remote-controlled toys, and other electronic toys.

To further give a facelift to domestic production and expand its footprint in the global market, the government of India has announced to invest USD 315 million to develop 8 toy manufacturing clusters in the country. One of such clusters is already operational in Koppal, Karnataka which has been prepared with the help of Aequs private limited, a reputed contract manufacturer of toys.

The Koppal cluster is spread across 400 acres out of which 300 acres have been earmarked for export activities. The remaining will be directed towards domestic production. The cluster will create 25,000 direct jobs and more than 100,000 indirect jobs. Six firms have already proposed to invest more than USD 200 million in the Koppal Cluster. To further lure more investors, the government is providing various fiscal subsidies such as 30?pital subsidy, 75% freight subsidy in the first two years (50% thereafter for the next 3 years), interest subsidy, need-based training support, and 100% reimbursement of stamp duty, and much more. It is believed that in the next 5 years, the production cluster can garner total investments to the tune of over USD 650 million.

The India Watch can offer a lot of tailor-made market intelligence and research to various domestic and international toy companies looking to enter and/ or expand in India. Investors looking to invest in toy manufacturing, government agencies, and trade associations can also avail of our research solutions to make an informed business decision. Hence, if you are looking for incisive business intelligence, feel free to click on the board below or drop us a mail.

We can offer a whole range of information