The country already is a design hub for global electronic companies but its manufacturing capabilities are hitherto limited to assembling with restricted front-end manufacturing. However, in the wake of the current COVID crisis when most of the global manufacturers are looking to derisk their supply chain and localize their production capabilities, there is ample headspace for electronic contract manufacturing to grow and expand.

As per the industry body, India's electronic contract manufacturing was pegged at USD 23.5 billion in FY 20, comprising a modest 3% of the global market. This however can grow sixfold to reach USD 152 billion in the next 5 years, consisting of around 14% of the global industry. The South Asian economy is so far becoming a major node in the global cell phone and smartphone manufacturing. Likewise, it has unrealized capabilities in the manufacturing of PCB, electronic appliances, industrial electronics, digital transformation hardware, medical devices, and much more. Once harnessed, It can see India playing a pivotal role in the global electronics industry.

India offers 100?I in electronics manufacturing. India has also deployed a construction-linked scheme, which many industry analysts believe will be a game-changer.

Besides numerous southern states such as Karnataka, Tamil Nadu, and Andhra Pradesh, the northern state of UP is coming up with state levels incentives, discounts, and subsidies to further attract global manufactures to set up their base in India.

The progressive policy framework has tasted initial success as many global electronic giants have shown interest to set up manufacturing in India. The South Korean mobile giant Samsung has invested USD 675 million in developing a mobile display manufacturing set-up in Noida. This will completely be an export-oriented unit.

The Indian government and other governing agencies understand the unrealized potential of the electronics industry and how through policy impetus and infrastructure support, it can be taken to new heights.

It also understands the strategic role the electronics industry will play in developing a USD 1 trillion digital economy in the country by 2025. In a new digital India smartphones, laptops & desktops, industrial electronics, digital transformation hardware, etc are going to play a crucial role.

Hence the government is committed to offering adequate infrastructure support and growth enabling policies in the form of incentives and subsidies.

In continuation of the Electronic Manufacturing Cluster (EMC) scheme notified in 2012, EMC 2.0 has been introduced recently. Under the scheme, the central government will offer financial incentives of up to 50% for developing industrial clusters for electronic manufacturing. The remaining investments will be provided by state governments, local industrial promotion bodies, etc. For developing Common Facility Centers (CFC)  the central government will give incentives up to 75%. EMCs are expected to attract investments from domestic and global manufactures by offering plug & play production units, advanced infrastructure, and a conducive environment for R&D activities. 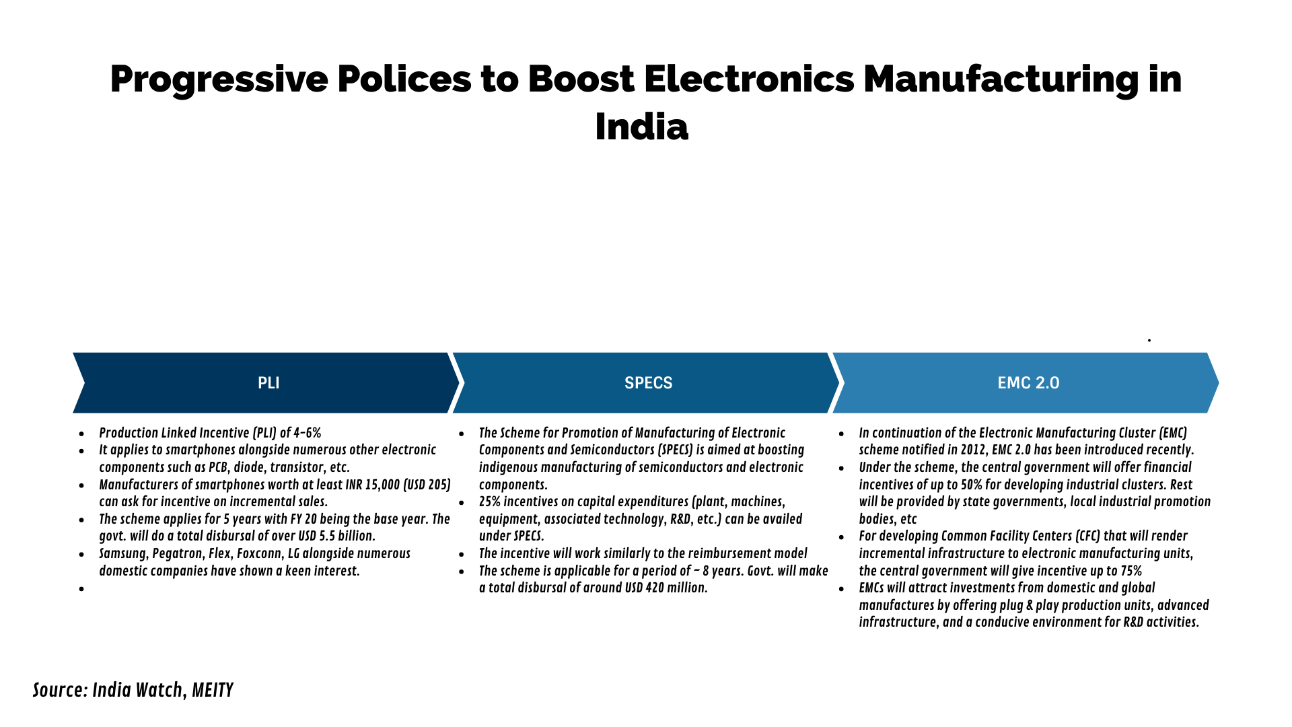 Under the Product Linked Incentive (PLI) scheme 6% incentives will be given to smartphone manufacturers on incremental sales. The incentive can be availed by domestic manufacturers as well as international manufacturers with a registered production facility in India. Under the PLI scheme, the government aims to disburse around USD 5.5 billion in the span of the next 5 years.

The Indian government has also outlined the Scheme for the Promotion of Electronic Components and Semiconductors (SPECS) under which 25% incentives will be given to semic conductor and electronic component manufactures on their capital expenditures.

Alongside fortifying export, there is also a tremendous amount of domestic demand, which is presently reliant on imports. Hence, besides a boost in export, around 40% of the increased production will be diverted to the domestic markets.