India is committed to manufacturing-led economic growth by expanding the sector's contribution to 25% of the total GDP. To put manufacturing at the center stage of development, GOI has deployed a host of programs and policies, including Make in India, Digital India, PLI schemes, simplified FDI policies, push to infrastructure growth, and much more. This intended objective of creating an extensive manufacturing base has further got a shot in the arm during the COVID crisis. As supply chains are realigning, India is poised to play a large role.

In India's ambition of becoming a manufacturing powerhouse, its textile industry is set to play a significant role. After declining by 35% y/y in March 2020, textile exports jumped by 27% in March 2021, painting an optimistic picture. During March 21, total exports amounted to USD 1.4 billion compared to USD 1.1 billion during the same period last year.  Despite the COVID-triggered crisis causing demand compression, the Indian textile industry has shown resilience. 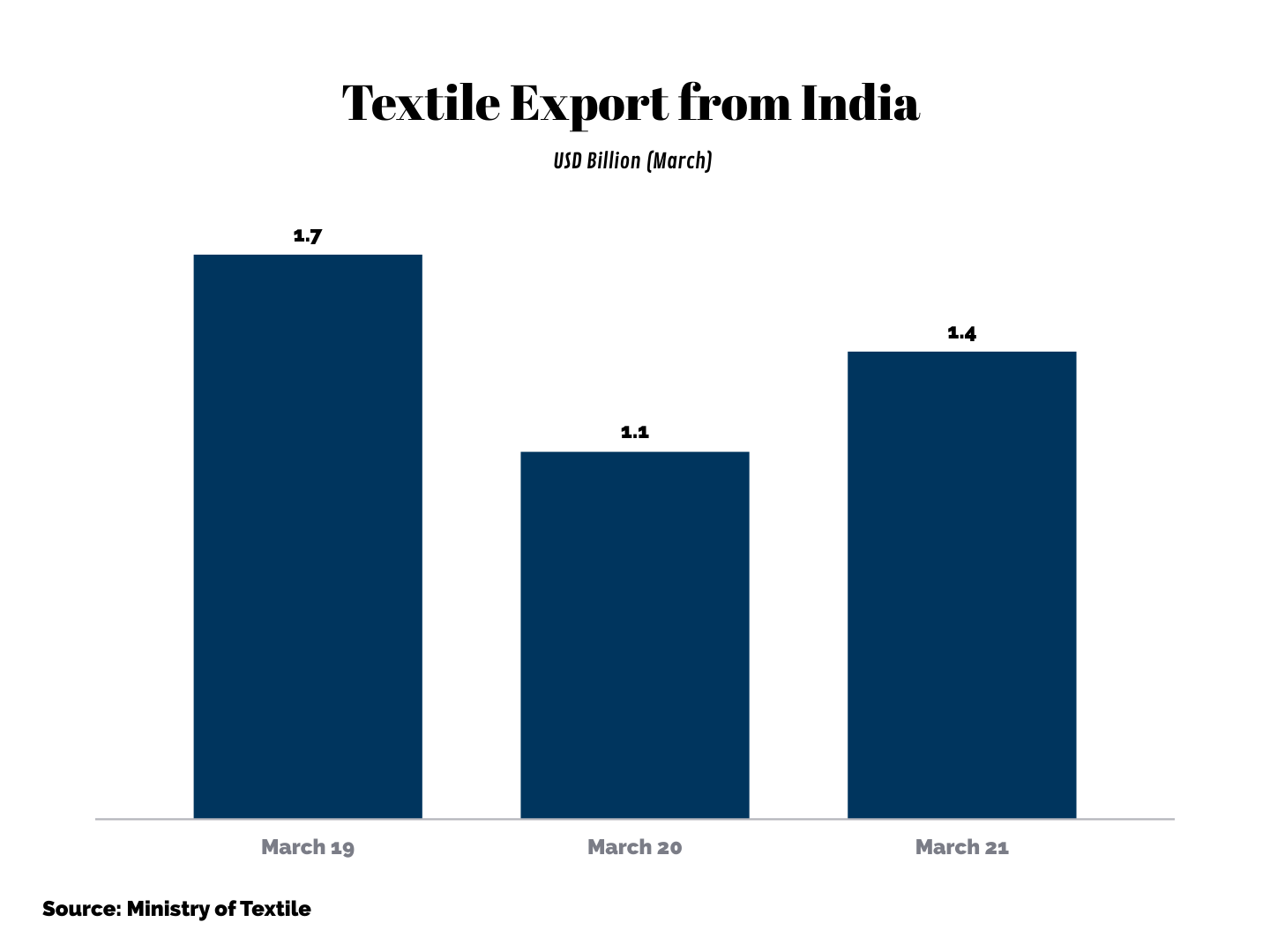 India's textile industry has numerous inherent advantages. Generating around 45 million jobs, it is one of the key employment generators in the country. The total size of the industry is rough ~ 2.3% of the Indian GDP. Its accounts for around 12% of the export income. India is also home to 23% of the global cotton supply, which ensures a seamless supply of raw materials.

The governing agencies also acknowledge the crucial role played by the textile industry and hence have chalked out various policy impetus to further bolster the sector. It has introduced a Production Linked Incentive (PLI) of USD 1.4 billion to boost textile production and exports. Already PLI schemes have been a game-changer in sectors such as smartphone manufacturing, resulting in a steep jump in manufacturing and a boost in exports.

The PLI will be directed towards 50 categories comprising of 40 Man-Made Fibres (MMF) and 10 industrial textile categories. India's textile export is primarily dominated by cotton fibers and the country accounts for just ~1% of the global MMF trade. However, it intends to boost MMF production through targeted PLI schemes.

The government has also outlined the national textile policy, which will be unveiled soon. The policy is aimed at attracting large ticket size investments and making India a major textile manufacturing hub in the world. The policy will emphasize more on MMF which is presently witnessing increased demand globally. The policy aims at generating export of over USD 27 billion in the next 5 years and create 35 million additional jobs in the sector.

To expand their share in global trade, indigenous manufactures need to play a crucial role. If the country has inherent strengths, it also has bottlenecks, which if not addressed can undermine growth.

The industry is highly unorganized and individual units and small manufacturing set-ups account for 85% of the total industry. There is a pressing need for big-ticket size investments in the sector. Meanwhile, it is also equally essential to help manufacturers scale up through policy support, easy credit options, and market knowledge.

It is noteworthy that despite a cheaper rate of labour, average productivity is much lesser in India, which neutralizes its wage advantages. To plug in the gap, it is essential to help the workforce increase their productivity through adequate training.

Markets in the world are opening and new export opportunities will unlock. However, this will also imply new challenges and domestic manufacturers need to cope with them effectively. They need to lower their overall inventory and prefer a just-in-time approach to contain any spiraling of costs. Similarly, it is essential to cope with extended timelines, which are mostly in the range of ~ 90 days from 30 days earlier.

As global demand trends are changing, manufacturers need to be agile enough to explore new product categories, which are registering elevated growth. PPE kits are a good example, where India has emerged as a major global player in just less than a year.