On the back of growing bilateral trade, German Investments in India have also seen an upturn in recent years. German investments in 2018 amounted to USD 931 million growing at a CAGR of 22.1% in the past 5 years. In 2020, despite the pandemic, the German FDI to India was around USD 420 million.

German investments in India are not a new phenomenon, as prominent German companies such as Bosh, Siemens, Bayer, etc. have been present in India since pre-independent times. In recent years, however, more German companies are contemplating moving their supply chain and production facilities to India, rather than establishing just trade offices. Governments of both countries have shown interest to nurture a strong relationship based on the thrust on trade, commerce, and investment inflows. Indian companies, especially IT companies such as Tata, Infosys, etc also have a strong ground presence in Germany.

Improvement in India’s business climate is also drawing the interest of German manufacturers. India under flagship programs such as Make in India and Self-Reliant India (Aatm Nirbhar Bharat) have taken a host of initiatives to give a facelift to its manufacturing sectors. Presently manufacturing comprises 18% of the GDP but the GOI has outlined a long-term roadmap to take the overall GDP contribution of manufacturing to a quarter.

100% FDI has been allowed in most of the sectors including pharma, infrastructure, food, textiles, medical devices, machinery, and much more. Even in critical sectors, FDI policies are liberalized. 74% FDI under the automatic route has been allowed in the defense manufacturing industry.

India has already strengthened its foothold in global pharma, automotive, textiles, smartphone steel & iron ore. However, there are numerous sunrise sectors such as electronic appliances, consumer goods, batteries & semiconductors, packaged food & beverages, hardware & machinery, etc. which are set to grow aggressively in the coming years. As Germany already has expertise in most of such sectors, it can benefit immensely from moving its supply chain to India in these categories. An Infrastructure Investment Grid (IIG) has been deployed that will facilitate USD 1.4 trillion investments by 2025. Already projects worth USD 692 billion is under construction. India’s recent upturn in infra growth is also widely acknowledged by the international investor community.

Systematically aviation, railways, urban transit, which were mostly state-run affairs have been now opened for increased private participation. In addition to improving its road, railways, and aviation sectors; the country is now aggressively working towards enhancing its port infrastructure. India aims to realize a gross MMPTA of 3300 by 2025 through process improvement, capacity building, and new port developments. 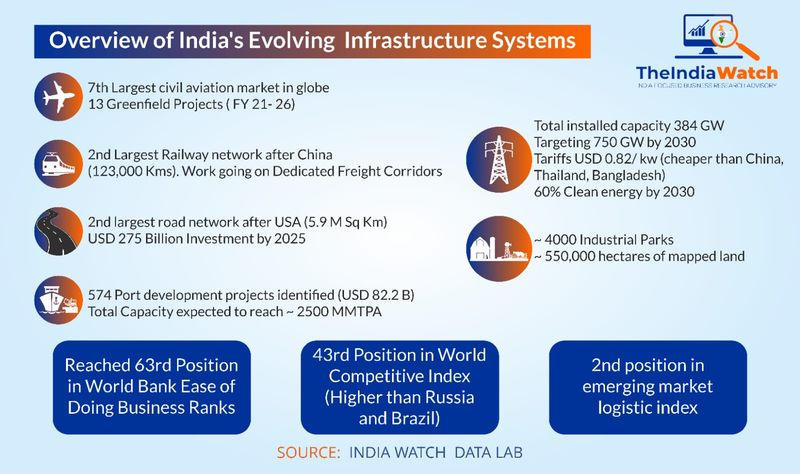 How The India Watch Can Help

As a top-notch India-centric market research and business consulting advisory, we can help German companies looking to enter the Indian market.