Indian economy grew at a commendable pace in the past three decades. As a natural corollary to economic progress, Indian cities and urban corridors expanded at an unprecedented pace. The flip side of the growth story has been the straining of resources and civic facilities in the cities. As the urban population swelled, traffic woes and challenges of congestion grew.

To systematically manage the bottleneck, the Indian government is aggressively building mass commute systems such as metro networks. Comprehensive metro networks, which are further backed by suburban networks and rapid transit lines are part of GOI's objective to enhance the overall living standards of residents alongside improving regional economic climate.

There are around ~ 40 projects in the pipeline including 551 Kms of approved network and another 926 Kms, which have been announced. It will require an aggregate investment of around USD 36.2 billion. 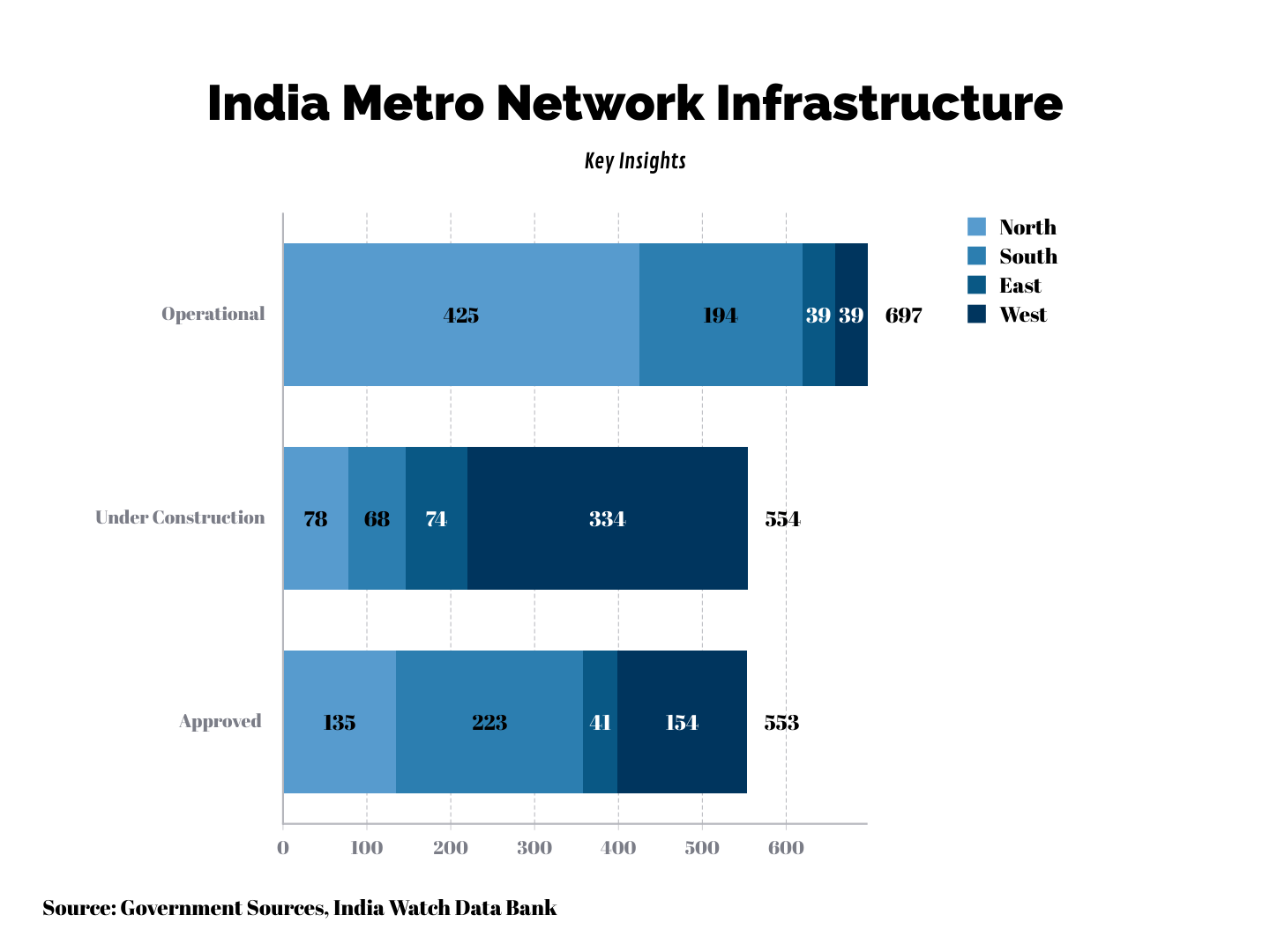 The Delhi Metro is the largest operating metro network in the country, spread across 348 Kms. The daily ridership of the Delhi metro reached ~ 6 million before the lockdown. 170 Kms of the metro network is under construction in Mumbai, making it the largest undergoing project.

Not just in metros, but in a host of Tier 2 cities such as Kochin, Kanpur, Agra, Patna, Nashik, Jaipur, Lucknow etc. metro construction is going full swing. For instance, in 3 cities (Agra, Kanpur, Meerut) of UP, the largest province of India, an aggregate investment of USD 5.6 billion has been made to develop expansive metro lines. This further underlines GOI's commitment to developing prolific mass transit lines to offer faster, safer, and cleaner commute in Indian cities.

Around ~ 20% of metro projects are executed under the PPP model in India, while the remaining are funded with the help of the Special Purpose Vehicle (SPV). In SPV close to half of the funds are raised from international and domestic lenders in the form of debt and equity. The remaining funding is done via state and central government.

As more metro projects in India are successfully taking off, international investors including SWFs, banks, development agencies, etc. are gaining confidence in the long-term profitability of such projects. 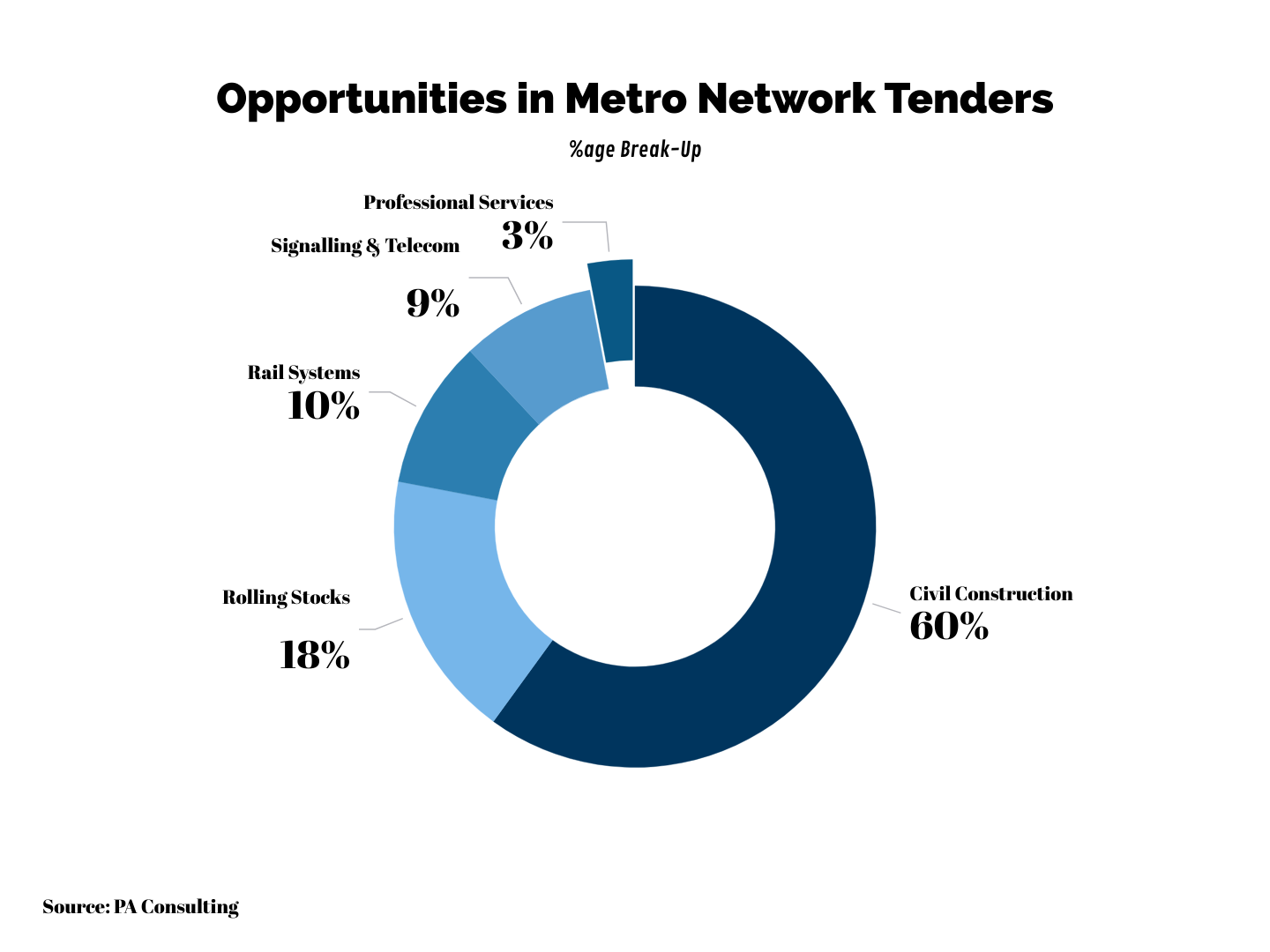 Going forward in the USD 36.2 billion worth pipeline of new metro projects, numerous new opportunities will unravel for international and domestic players.

Around 60% of tenders (value-wise) will be related to civil construction followed by Rolling Stocks manufacturing, which will comprise a little less than a fifth of the total value. International players like Bombardier and Alstom are already active in the segment. They have also set up manufacturing capabilities in India. The consulting and advisory space comprises just ~ 3% of the total value but is marked by the increased presence of international entities. 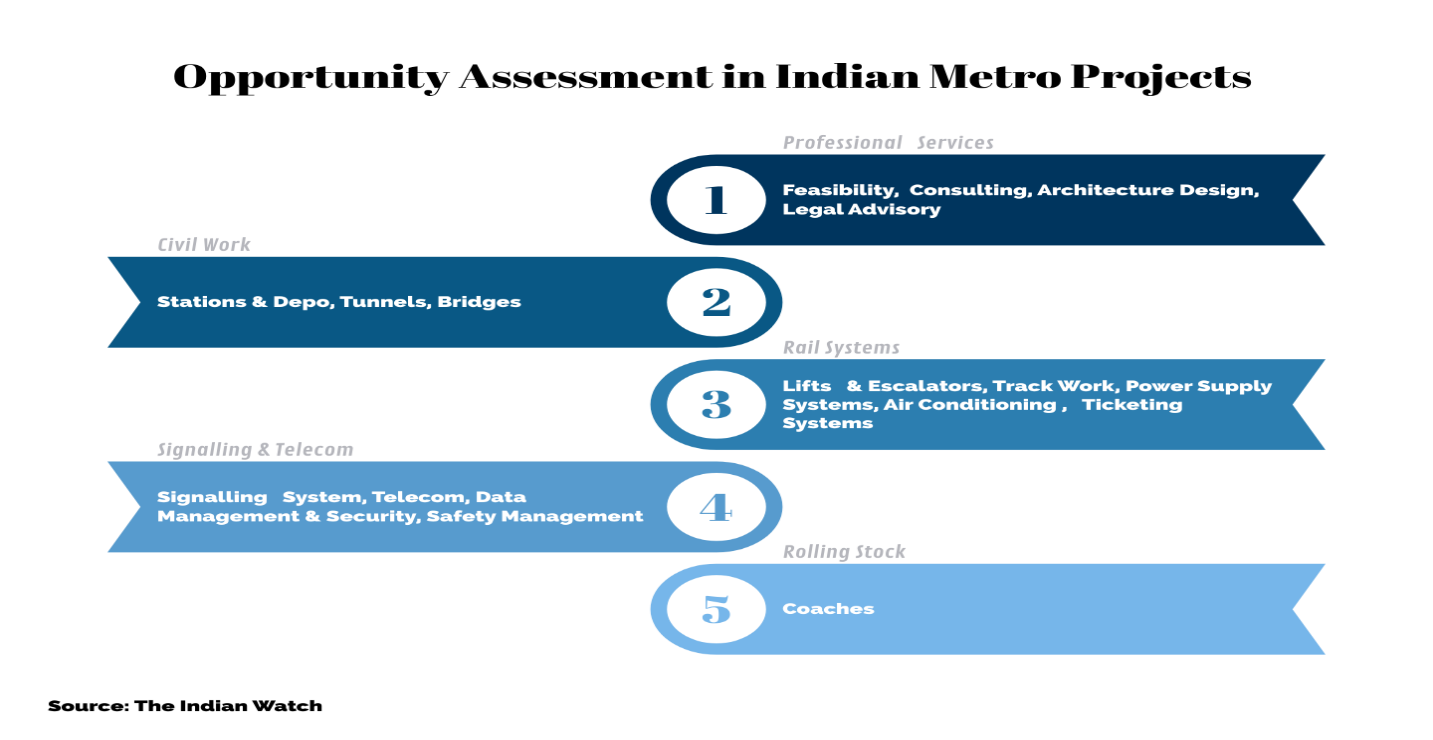 India also has big indigenous contractors & engineering companies such as L&T, Punj Loid, Reliance, Gammon India, etc; with proven capabilities of timely delivery of large-scale metro projects. This will intensify competition in the times to come. However, there will be a lot of opportunities for JVs and need-based partnerships, which can be beneficial for all the stakeholders involved.

Though International companies can enter through the open and direct bidding process of the Indian metro,  given the complex and multifaceted nature of metro-network construction, it is advisable to be part of a consortium or ink JVs with domestic manufactures. Besides, there are also immense opportunities in the subcontracting space, which companies should target.