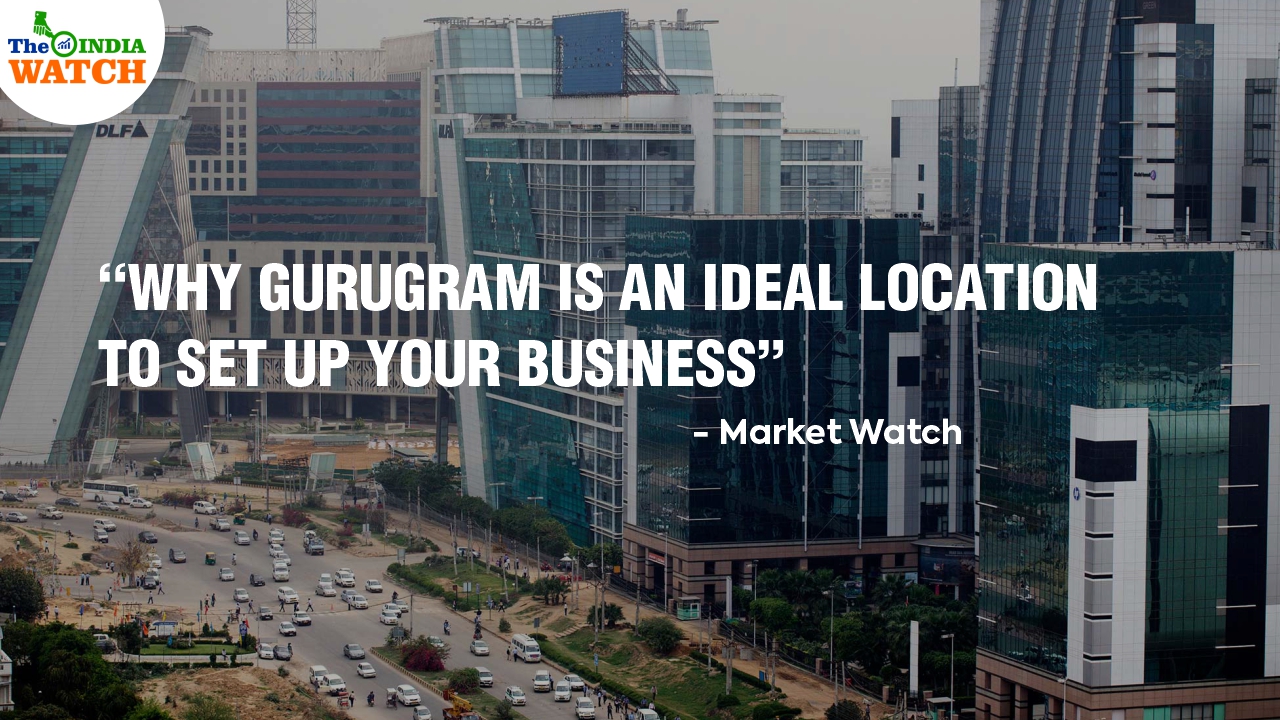 Market Watch: Why Gurugram is an ideal location to set up your business

The city of Gurugram is an old one with an impressive lineage of historical facts. It’s a satellite city of New Delhi, the national capital, and one of the most prominent cities and districts of the state of Haryana. It’s the second-biggest IT hub and the third-largest BFSI hub in India. It’s both metropolitan and cosmopolitan.

Located in the north-western part of India, it is situated ~ 30 Kms from Delhi and is integral part of the National Capital Region (NCR). With the advent of multiple industries, including but not limited to, auto manufacturing, retail, healthcare, IT & ITeS, BFSI, and more, the city has become a globally major industrial and corporate hub in a span of just a few years. We look at why and how Gurugram is an ideal destination for any kind of business to be set up.

While Gurugram is India’s 56th biggest city in terms of population, it ranks an impressive 8th in the top 10 Indian cities in terms of economic wealth and financial capital. It’s total population, as of date, is estimated to be around 3.5 million, with a population density of around 2,000 people per sq. km.

The Economy of Gurugram

Gurugram is home to the offices of over 350 Fortune 500 companies. It ranks very high on the human development index, lying at over 0.9. In 1975, Maruti Suzuki, a leading car manufacturer in the country, set up its manufacturing plant here. Since then the city has been consistently moving up the curve, becoming a bustling business and commercial hub in the country.

Apart from the main city, Gurugram stands supplemented with the outskirts of the likes of New Gurugram, Manesar, and Sohna, which are emerging commercial and residential corridors. Gurgaon is also linked with the upcoming Delhi Mumbai Industrial Corridor (DMIC), which can become a growth multiplier in the times to come.

Realty major DLF owns vast stretches of land across the city, and has gifted Gurugram the likes of DLF Cyber City and DLF Cyber Hub. There are quite a few BPOs and KPOS also having their offices in the city, major amongst which are Genpact, WNS, EXL, American Express, and Accenture. Various other MNCs, such as Coca Cola, Pepsi, BMW, Agilent Technologies, and Hyundai have chosen Gurugram as their business headquarters. Also, Gurugram has around 45 shopping malls, making it a retail hub in addition.

The liveability index of Gurugram is among the highest in all major metropolitan and cosmopolitan cities of India, viz., Mumbai, Pune, Kolkata, Ahmedabad, Hyderabad, Bengaluru, and Chennai. The city has an excellent public infrastructure in terms of electricity, water supply, drainage systems, roads, flyovers, underpasses, markets, street lighting, town planning and layout, transportation, connectivity, and other citizen-centric utilities.

Finally, the city has got its own Rapid Metro connecting DLF Cyber City to Sector 55-56 located on the other end of the Golf Course Road. It is also connected to the Yellow Line of the Delhi Metro at Sikanderpur Metro Station. There are 6 metro stations of the Yellow Line in Gurugram, originating at Huda City Centre near Sectors 29 and 44.

Gurugram is located adjacently in the south-west of and just 30 km away from the national capital. It is connected to New Delhi via the Jaipur Expressway (NH-48), Mehrauli – Gurugram Road, Dwarka Expressway (NPR), and more. On the west, it has Jhajjar with Mewat in the south and Faridabad in the east.

Gurugram is an ideal destination in India to set up any sort of business, whether from scratch or organic / inorganic expansion of a large / MNC business. Major commercial catchment areas of the city are Udyog Vihar, DLF Cyber City, Golf Course Road, Sohna Road, Golf Course Extension, MG Road, Dwarka Expressway, and Manesar. Across these places and more, you find all kinds of office spaces, such as dedicated floors, co-working, flexible, shared, building, and more.

This will be followed by the average office property rental and purchase rates in Gurugram across years. We will use the actual data for 2018-2021 and use the CAGR formula to extrapolate the trend to 2022 to furnish its expected number.

As we can see in the two graphs above, the average office property rental and purchase rates are very much in control, and give those who are considering setting up or expanding their business in Gurugram added reasons to do so. The CAGR comes out to be 10.67% in case of year-wise ACPRR (rental), and 18.92% in case of ACPPR (purchase). We have adjusted the 2022 numbers on the higher side in both the cases because of the withering effect of COVID.

As we can see in the graph above, the average retail property rental and purchase rates are very much in control, and give those who are considering setting up or expanding their business in Gurugram added reasons to do so. The CAGR comes out to be 10.67% in case of year-wise ARPRR (rental), and 15.02% in case of ARPPR (purchase). We have adjusted the 2022 numbers on the higher side in both the cases because of the withering effect of COVID.

In January 2021, Indian realty major DLF Group and US-based Hines Group declared joint investment of roughly INR 1,300 crore to develop grand commercial projects across the city in a span of 4-5 years. In November, IKEA announced that its first shopping mall with in the country investment of around INR 3,500 crore would come up in Gurugram.

In April 2022, Gurugram-based realty major SS Group announced that it’d invest around INR 1,950 crore to develop 4.15 million sq. ft worth of mixed-use spaces in the city. In June, US-based co-working firm, Venture X, invested around INR 40 crore to set up flexible work spaces in Sector-67 and Sector-44 of the city.

While it’s already quite clear that Gurugram is a haven for new and existing businesses of all sorts, we will do an analysis to confirm this fact. We will, in the graph below, look at the year-wise ratios of APCI (average per capita income) with ACPRR (average commercial/office property rental rates) and ARPRR (average retail property rental rates), and see how the ratios trend over the 5-year horizon (the higher they get, the better is the situation to start a business in Gurugram right now and/or in the near future).

It is clear from the graph above that the average ratio-trend is on-the-rise in general in a steady manner across the city. The only exceptional bit are years of 2020 and 2021 that were COVID-hit and saw reduced / restricted / diminished economic activity on account of lockdowns and closure of several public places. As we proceed ahead in this decade, this ratio, a good indicator of the purchasing power and affordability indices of individuals and business, can only run north here on.

We discussed in brief the economic history and the demographics of Gurugram, followed by its economic and liveability indices. We saw the rising average per capita income (APCI) as a part of this discussion in the form of its 5-year trend. We also discussed the infrastructural elements of the city, including but not limited to, schools, hospitals, shopping malls, residential hubs, and more. In the process, we established that Gurugram is a top city of India in terms of liveability, economy, and ease of doing business among other things.

Next, we moved to discussing the major office, commercial, and retail hubs of the city, covering a good majority of them in the form of Udyog Vihar, DLF Cyber City and Cyber Hub, MG Road, Sohna Road, Golf Course Road, Golf Course Extension, Dwarka Expressway, Manesar, and more. We saw how the average commercial (ACPRR, ACPPR) and retail property rental and purchase rates (ARPRR, ARPPR) fared over a horizon of past 5 years, making the city an ideal destination to set up any sort of business.

Last but not the least, we analysed the APCI as a ratio of ACPRR and ARPRR to find that the economic environment of Gurugram is only going to get more and more business-friendly from here on. To sum up, it won’t be an overstatement to say that Gurugram Is among the best cities in entire India for any business to start from scratch, or for an existing MNC or large business to expand operations there. As this decade progresses further, the future outlook of the city in terms of its economic viability only looks increasingly encouraging.

How The India Watch can help?

The India Watch is leading market research, business advisory, and feasibility study consulting company based in India. The company has its ground presence in the Gurgaon market and works with leading MNCs, fair-sized enterprises, investors, and start-ups that are looking for tailor-made market research services in the Gurgaon and other parts of the Delhi NCR.

The India Watch, which is India-focused research and consulting house is counted among the top market research and feasibility study consultants in Gurgaon.

Its range of services includes