Like other major economies in the world, the Black Swan event has been a destabilizing factor in India’s growth trajectory, leading to an economic contraction in FY 21. The ill-effects of the crisis ripped through the entire supply chain causing the slowdown in business activities. Post suspension of the lockdown the economy has shown signs of recovery but the COVID continued to weigh on the overall growth in the subsequent quarters. The country that clocked an average growth of 7% in the last 5 years, has contracted for the first time since its independence.

However, as we are set to enter FY 22,  conditions look relatively stable backed by healthy moderation to the economy. The improvement in the economy is also expedited by the successful introduction and faster deployment of the COVID vaccines.

Going forward, India’s economic outlook for the year FY 22 will be pivoted on its potential to build a robust manufacturing sector and seamlessly integrate with the international supply chain, upscale its infrastructure, and spearhead digitization of its vast service sector to arrest the fatigue caused by the crisis. Primary sectors such as agriculture will also play a significant role in economic growth. 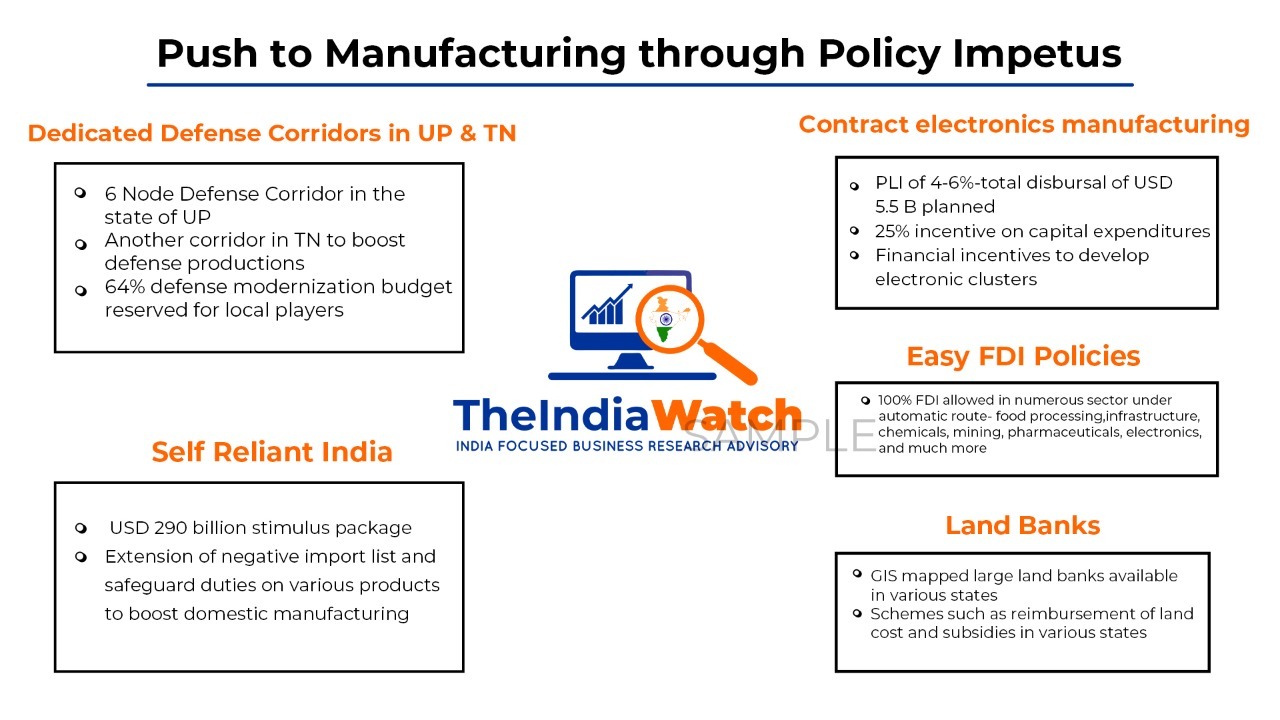 When the trade war between China & the USA intensified in 2018, India emerged as a viable alternative to companies looking to de-risk their supply chain from China. The growing trade war was also an opportune time for the country, which was aiming at taking the GDP contribution by manufacturing to 25%, to rise -up and fill the gaps in the international supply chain.

The Government of India (GOI) is also committed to developing prolific manufacturing industry. The government had outlined the Make in India Plan in 2014 which has been further retweaked to Aatm Nirbhar Bharat (Self Reliance India), aimed at fast-tracking Indian manufacturing sector growth to realize self-sufficiency alongside deepening its foothold in the global supply chain and boost overall exports. To give a big push to indigenous manufacturing, governing authorities are incentivizing FDI inflow, freeing up the land bank for new manufacturing units, systematically developing manufacturing clusters & corridors, and introducing various subsidies. 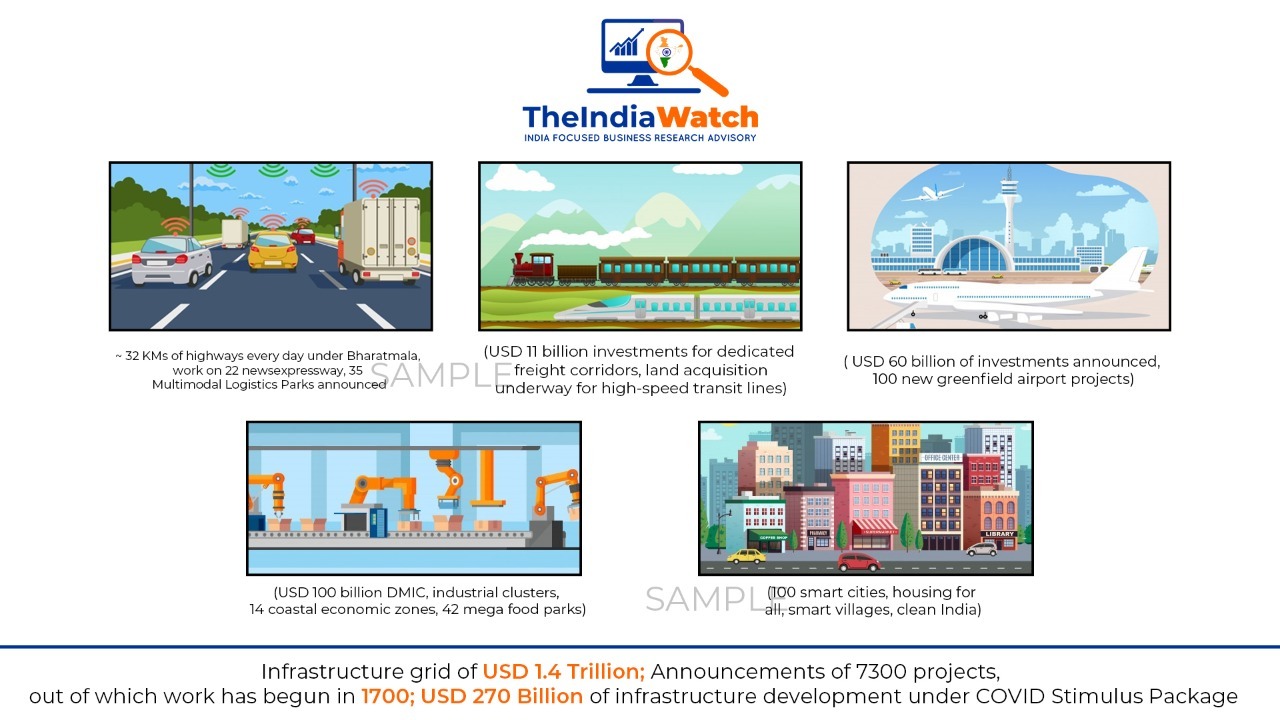 It is believed that infrastructure is a bottleneck in the current economic growth and hence by giving a facelift to the Indian infrastructure under the NIG, the country can realize larger economic potential. Bolstering the overall infrastructure can improve the lives of millions of Indian citizens, enhance industrial productivity, and attract large global MNCs to come and operate in the country.

Moreover, Infrastructure spending in tandem with the USD 270 billion government economic recovery package can work in tandem to arrest a fall in employment and build economic momentum.

Historically countries enhance their public spending during the time of economic crisis. During the New Deal proposed in the USA during 1933, the US government worked on more than  30,000 infrastructure projects for the next 5 years resulting in the construction of numerous highways, dams, schools, sporting complexes, hospitals, etc. Likewise, China during the 2008 crisis spent 7% of GDP in developing public housing, urban infrastructure alongside building extensive railways and suburban railway networks.

India's ambitious infrastructure development plan can be a blessing in disguise and would not just give thrust to the current economy but also pave way for long-term sustainable growth. Heightened infrastructure growth will have a positive cascading effect throughout the economy. 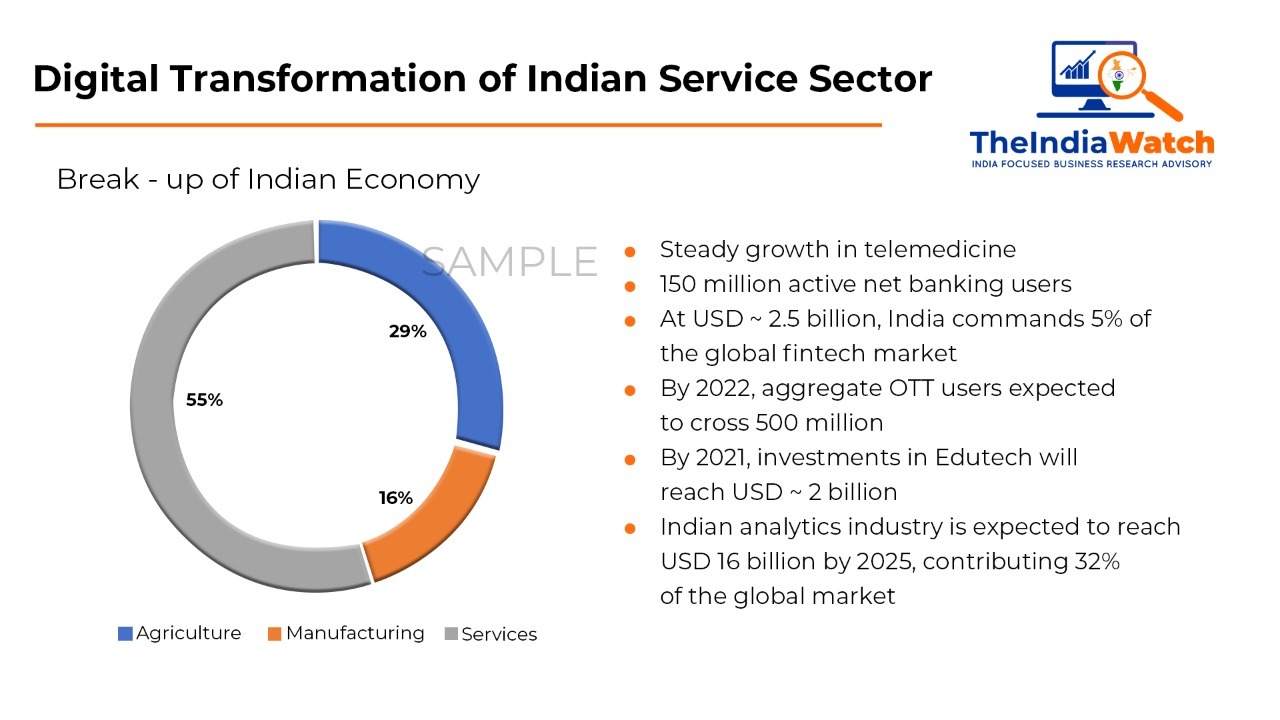 India’s service industry is set to upscale with technology going to play a significant role across the value chain from creation to deployment to consumption. India’s growth in the service sector will be substantiated by young demographics alongside higher growth in internet and smartphone penetration. India already boasts one of the cheapest 4G internet across the globe. Its smartphone penetration is pegged at 290 million and is set to rise further. Rapidly growing internet penetration augmented by evolving consumer behavior is chronicling a new era for Indian services industries such as banking & financial services, education, healthcare, retail, media, etc. The recent lockdown has also played a crucial role in driving mass-level changes in consumer behaviors.

Already upcoming industries such as fintech, Edutech, telemedicine are registering commendable growth. India’s online education industry has amassed over USD 1 billion in private equity funding. The industry is set to cross USD 2 billion by the next year and is growing by another 200% in another 2 years. India already has a 5% share in the global fintech market, which is set for momentous growth in the times to come.

As economies are normalizing throughout the globe, confidence is restoring in the USD 180 billion Indian IT and ITeS industry. Enterprises around the globe are embarking on digital transformation. This will unlock new opportunities for the sector.

In FY 22, rural India is going to play a much larger role. In FY 21 as well, rural India has contributed to building resilience in the face of the COVID crisis. Consecutive years of good rainfall have resulted in the rise in disposable income amongst the farmer community. This has also been reflected in the uptick in sales in tractors, personal vehicles, electronic appliances in the hinterlands of India. Similarly, there has been a surge in consumption of discretionary products such as beverages, snack items, personal care products, etc. Leading FMCG manufactures of India also realize the hidden potential in Rural India and are extending their distribution structure to ensure last-mile distribution in Indian villages.

Following government-backed initiatives to enhance rural infrastructure and expand credit reach,  profound changes are happening in the structure of the rural economy. Small & medium enterprises are now coming up from the rural parts of the country, although nature still largely remains agrarian.

In the coming time, there will be a thrust to develop self-sufficient Indian villages through creating more industries and MSMEs in the rural parts of the country. This will rein urban migration and maintain rural-urban balance, besides generating new employment opportunities and painting an overall optimistic picture. There is tremendous untapped potential in rural-centric industries such as agri-food processing, poultry & dairy, fishery, forest-based industries, handloom textiles, etc. Through concentrated efforts, this needs to be further channelized.